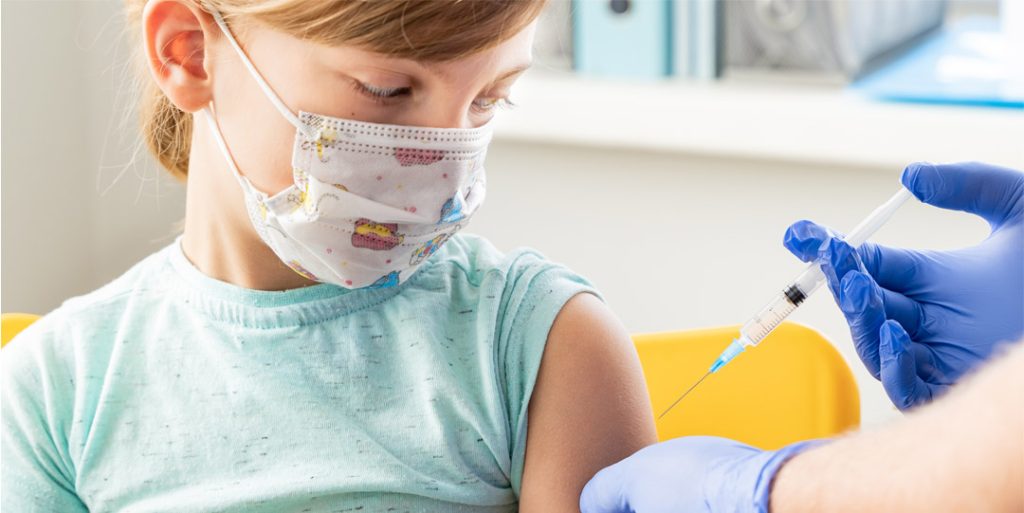 This past week, multiple MedShadow staffers have been sidelined by influenza, COVID and even strep throat. Over the past two years, experts have warned of the possibility of an influx of respiratory illnesses such as influenza cases complicating the pandemic, but flu cases remained low for both 2020 and 2021. Some experts attributed low rates of respiratory illnesses to the use of masks and social distancing to prevent the spread of COVID. Unfortunately, this year influenza cases started spiking early are still “exploding” across the country.

And it’s not just the flu. Cases of respiratory syncytial virus (RSV) are sending more children to the hospital than ever, packing the pediatric units to the point that many states have few or no pediatric beds available. While both children and adults can contract RSV—and most people do multiple times throughout their lifetimes—children are more likely to become seriously ill. Experts warn that one reason for the raise in severity could the fact that even mild cases of COVID seem to weaken the immune system, leaving you vulnerable to infections like RSV and influenza.

Researchers are working to develop a vaccine for RSV, but in the meantime, there is a shot that can help protect you and your family from influenza. Here’s what to know about it.

Keep Up to Date on Influenza Spread

The Centers for Disease Control post weekly updates on the spread of the flu throughout the season. You can find the weekly FluView updates here.

We are still early in this year’s flu season. As of the end of October 2022, about 1.6 million patients have likely contracted the flu. 13,000 have been hospitalized and 730 have died. Two of those who died were children. The hospitalization rate seen at this point in the season is the highest since the 2010-2011 season. 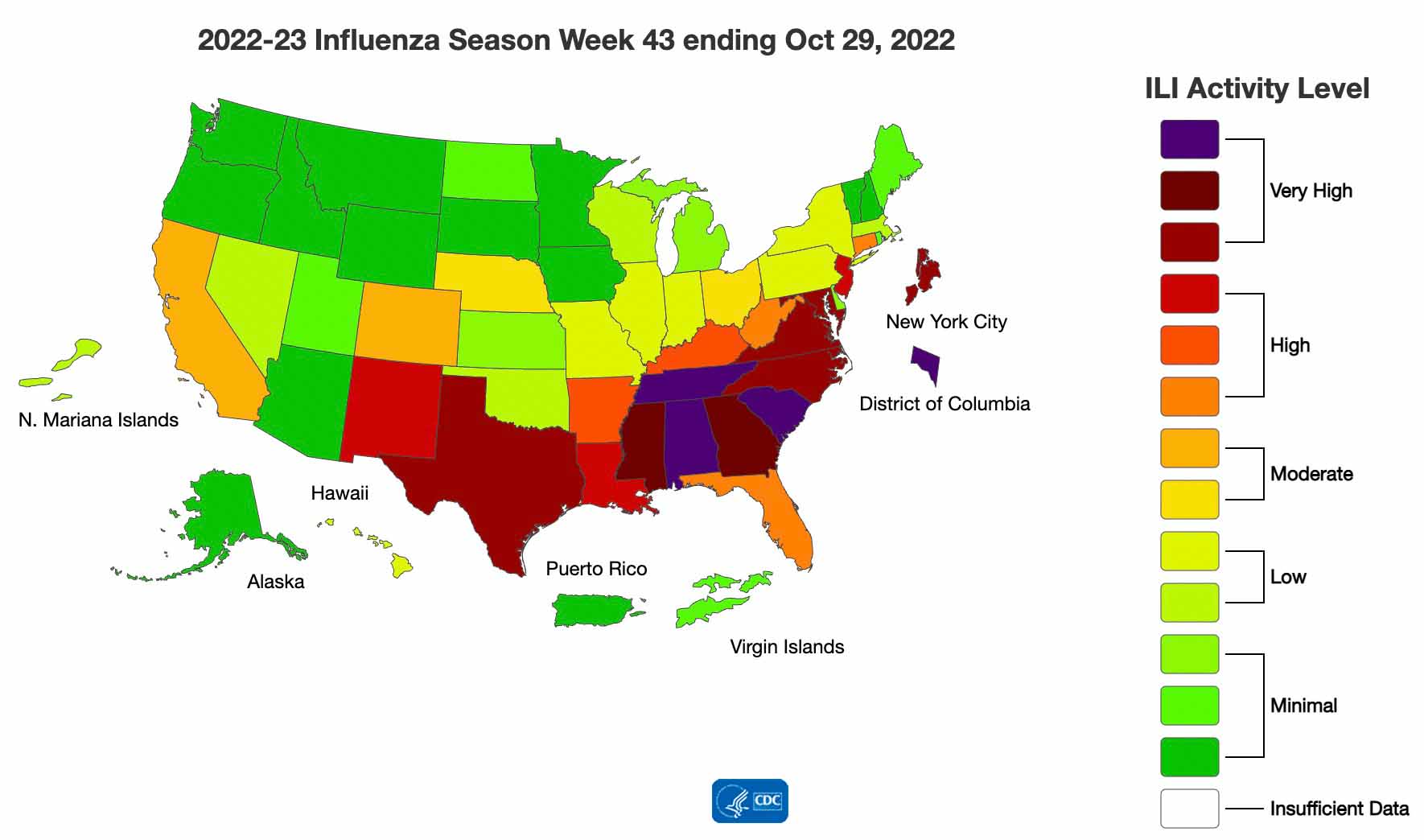 Benefits of the Flu Vaccine

Even though the flu shot is not a perfect vaccine and offers only 40% to 60% protection from infection, it can provide enormous benefits.

Scientists say that that’s enough to minimize the disease’s spread throughout the population. If you do contract the disease, having had the vaccination may render any flu you do contract less severe, preventing the most serious complications, like pneumonia and even death. In 2019, between 24,000 and 62,000 Americans died from the flu and between 410,000 and 740,000 were hospitalized because of it. Flu is rarely listed as cause of death on death certificates. Instead, the cause is more often called pneumonia or another affliction the flu can lead to.

It’s important to keep in mind that while the flu vaccine can help protect you from influenza, it cannot protect you from COVID or RSV. You should continue to take steps to keep yourself and your family safe from other viruses.

What’s In a Flu Shot

To come up with a new flu vaccine each year, researchers make educated guesses as to which strains of flu are most likely to cause the illness based on what circulated the previous year.

The main ingredients in influenza vaccines are either dead or weakened flu viruses. These viruses cannot replicate and wreak havoc on your body like a normal flu virus, but their purpose is to prompt your immune system to mount an immune response. This response prepares your body to recognize and respond faster if it does encounter the actual influenza virus later in the season.

The Flu Shot’s Possible Side Effects

The flu vaccine can cause side effects, which, while generally not dangerous, can mimic the types of symptoms you might get from a mild influenza infection. “Once in a while, people have very uncomfortable reactions. Your body aches, [you can experience] chills, headaches. I’ve had those at least twice in the last 20 years of getting flu shots since I became a doctor. And I felt terrible,” says Wu.

It is concerns about side effects that a third of parents cited as the reason for not having their children receive the flu vaccine, according to a survey.

“In the process of mounting that immune response, making the antibodies to be able to battle the real flu, people can feel terrible because it feels like you’re fighting off the flu” Wu says. He adds, “It’s a one, two-day reaction that’s completely different from actually getting the flu, which is a seven-day or more process. One is an immune reaction that is temporary, and the other is you are infected.”

Aside from brief, flu-like symptoms lasting a day or two, patients also report pain or soreness at the injection site. Wu says this reaction is common. He recommends keeping the arm moving to alleviate the pain. If the pain is acute, Wu suggests you taking Tylenol, Advil or Motrin. He cautions, however, that you should only do so if you feel very sick, because it can interfere with the immune system response to the flu shot, which lowers the effectiveness of the flu shot.

Lastly, there are some other possible side effects, depending on the type of vaccine you get. Most vaccines do not contain thimerosal, a preservative that was once considered controversial, but has since been shown to be safe in vaccines. It does, however, contain egg, which can be a problem for patients with severe egg allergies.

If you or your child has such an allergy, know that most doctors and pharmacists stock a few eggless vaccines, says Wu. These vaccines, known as cell culture vaccines, are made using animal cells and recombinant vaccines that are synthetic and don’t have egg products.

Seniors should get the higher-dose vaccines, which were designed for patients over age 65 to ensure their immune systems respond adequately.

For those who can’t tolerate needles, there are nasal spray flu vaccines. To find out where you can get your flu vaccine, check out this vaccine finder.

I’m healthy . Don’t need vaccines.I’m for Upper respiratory care. vitamine C ,saline nasal spray or gargle, zinc losenges ,Hydrogen peroxide and my favourite fresh ginger tea [inhaling the hot vapours] to clear my lungs also I chop it up in my oatmeal. For those who feel they need the vaccine [not mandated yet] but fill your boots.I don’t even get colds.