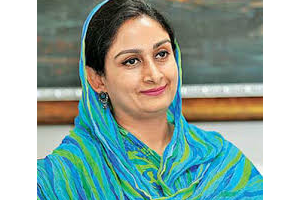 Good for you, India!

Despite the fact that Pespi dangled $5 billion in front of India’s top officials, the country’s minister of food processing industries, Harsimrat Kaur Badal (pictured left), met with Pepsi’s chief executive, Indra Nooyi (who was herself born in India, though she is American now), to request that Pepsi reduce the sugar content in its carbonated beverages. When a company plans to invest that kind of money (and that’s a LOT of money), the temptation must be to take the money and not complain about the product. However, India’s minister went on record about the government’s concern for the long-term health of 1. their wealthy, who are facing a quick and recent rise in obesity and cardiovascular disease and 2. their poor, who face malnutrition that sugary sodas worsen rather than alleviate.

The minister’s request for less sugar in Pepsi sodas was in response to Pepsi’s announced plans to make the $5 billion investment in India by 2020 to “cater to” rising demand for sugary soft drinks. Would it be more accurate to replace “cater to” with “create and increase” demand for Pepsi products?

Now wouldn’t it be nice if all governments could take the high road when it came to the health of their citizens in the face of corporate largesse?

How Wildfires Affect Your Health