Does Medical Marijuana Cut Down on Prescription Drug Use? 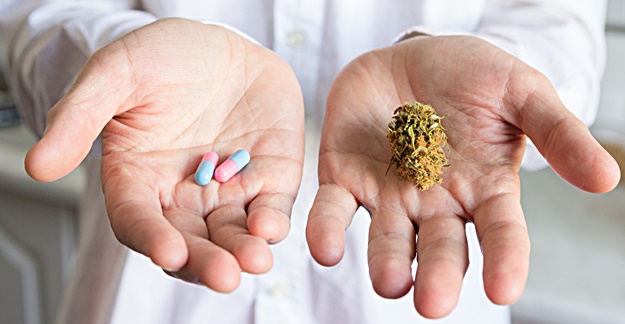 The rise in the number of states allowing marijuana for medical use seems to be having an unexpected benefit: It has led to fewer drug prescriptions being filled, especially meds used to treat pain.

W. David Bradford, PhD, of the Department of Public Administration and Policy at the University of Georgia and his daughter, Ashley C. Bradford, a graduate student in the department, made their conclusion based on prescriptions filled under the Medicare Prescription Drug Plan (Part D) between 2010 to 2013.

In 2013, 17 states and the District of Columbia allowed cannabis to be prescribed for medicinal purposes. Now, it’s 25 states.

The pair focused on scripts written in these states that could potentially be substituted for medical marijuana instead, to treat conditions such as glaucoma, nausea, pain, seizures, depression and anxiety.

Fewer prescriptions were written for most of the conditions: A drop of 1,826 daily doses in the pain category and 265 in the depression category, for example, the researchers reported in Health Affairs.

However, the number of daily doses for glaucoma medication increased by 35. The researchers explained that even though marijuana can produce a reduction in eye pressure, the effect only lasts about an hour, and expecting patients to take marijuana throughout the day is considered “unrealistic.”

While medical marijuana may appear to be a panacea for many conditions, it is important to note that there is a potential for abuse. Many states now require medical marijuana patients to have an established relationship with their doctor and a physical exam in order to receive cannabis, an effort to curb the use of so-called “pot doctors.”

However, compared to traditional prescription medications, marijuana’s side effects appear to be more mild, one factor in why people turn to cannabis for relief.