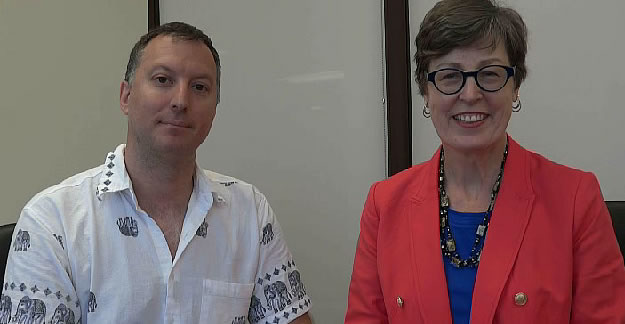 This week Su and Jonathan take a look at the most common ingredients in bug repellents. Which are safest and which are most effective? Answers to that and a look at a homemade citronella arrangement.

Su Robotti: Welcome to MedShadow TV. My name is Su Robotti, and I’m the founder of MedShadow.

SR: Today, Jonathan and I are going to talk about bug repellents. Bug repellents are a much more important than just keeping away little flying things that annoy you. Mosquitoes: There are multiple types of mosquitoes that can carry a variety of diseases such as West Nile disease, Zika, dengue fever, encephalitis. And now also deer ticks that bug repellents can’t keep away from you and of course the concern with deer ticks is Lyme disease.

The most popular or the most well-known bug repellent is DEET, and it has a long and concerning history about neurotoxicity except that I think most people, including me, are unclear about what that really means in their daily life. Can you explain a little bit about neurotoxicity and the concerns with DEET?

JB: Sure. Neurotoxicity simply means that there is a part of DEET that is somewhat toxic and can impact the nervous system of the body. In fact, there has been some evidence that DEET can contribute to nervous system damage and seizures.

SR: How much? That sounds very concerning, so how much information is there on that? I mean does it affect one out of every ten people? One out of a hundred people?

JB: It’s actually very, very small. To be honest, DEET has been somewhat maligned. The chemical is actually very, very effective in repelling, as you mentioned, many different types of insects. And as far as the neurotoxicity you were talking about, that is really rarely seen. And when it has been seen, it’s been seen in people that have used it for a very long period of time, in very large doses, and used it frequently.

SR: So the takeaway is be careful. Use DEET sparingly when you do need it. But it’s a very broad spectrum bug repellent. It will repel ticks and most all mosquitoes. And I believe I’ve heard that neurotoxicity has been seen in about 1 in a hundred million users, so it’s really a very small concern. Just treat it with respect.

It is very irritating to your eyes, so wash your hands immediately after using it. And it can dissolve plastic. It is not a mild chemical, so don’t let it come in contact with a backpack that has plastic or anything that has plastic. It could damage it.

The next ingredient that you’ll see very commonly is picaridin. Did I say that right?

SR: Picaridin has only been approved [in the US] since 2005, so it does not have as long a body of research with it, yet it seems to be pretty effective they say. The research shows that it lasts longer than DEET. A 10% concentration can last from between 3-1/2 to 8 hours. It’s a nice little concentration and a nice a long time.

It does not have a bad smell, but does it have neurotoxicity issues too?

JB: No. Even though as you mentioned it’s only been in the market since 2005, the available research indicates that there aren’t any neurotoxicity issues. So if that is a concern of yours because of what we mentioned about DEET, even though we mentioned that the neurotoxicity concern with DEET is very minimal, you don’t really have anything to worry about in that concern with picaridin.

SR: Yes. Picaridin is very effective against ticks and most mosquitoes, but generally not against mosquitoes that carry West Nile disease. So if West Nile is an issue in your part of the country, you may want to try a different bug repellant. Next up, IR3535. That’s an unfortunate name. It’s not as catchy as picaridin or DEET, but IR3535 has been around for more than 20 years in Europe and since 1999 in the US. What about its toxicity?

JB: This is very similar to picaridin and that there has not been very much evidence of any neurotoxicity associated with it. In fact, it has a very good side effect profile. The only concern is that as with DEET, it can be very irritating to eyes and as was also seen with DEET, it can eat your plastic.

SR: It is very good on deer ticks and many mosquitoes, but not great on mosquitoes that carry Zika, or yellow fever, dengue, and encephalitis — usually not big issues in the US but be aware of that. So particularly if there is a Zika concern or if you’re a pregnant woman, you may want to find a different bug repellent.

JB: I think it’s something that it may –- there is inconclusive evidence that it is as good as DEET. But if you’re concerned, if you want a more natural alternative, then definitely oil of lemon eucalyptus or PMD is something you might want to look into.

SR: It has not been tested as well as the other drugs by the FDA, because it’s a botanical, so it doesn’t have quite as rigorous a clinical testing profile. But they have found that it’s not particularly effective against mosquitoes that carry Zika.

It’s not particularly effective against sandflies or midges. Midges are very — well, no-see-ums. I don’t actually use bug sprays for those, because I try to avoid them. There’s one last thing to talk to you about. The combination of sunscreens and bug repellent, that seems like a great idea.

JB: In theory, it does, but there’s only one problem with that. With sunscreens — anything that contains sunscreen — you have to reapply that every 2 hours in order for it to remain effective. Now, if you have a sunscreen like that that also contains bug repellent, if you’re going to be reapplying that every couple of hours and you’re going to be outside for a long period of time, that might lead to some problems, because you might be rubbing a little too much DEET, or picaridin, or IR3535 into your skin as a result.

SR: We like to remind everybody at MedShadow that every product you put on your body, every medicine that you ingest can have an effect on you — a side effect, or a long-term effect — so whenever possible you want to minimize how much of bug spray that you use. You want to use it when you need to be effective, but you have alternatives such as staying in screened-in areas therefore avoiding mosquitoes and avoiding ticks.

Also what I like to use is an outdoor fan when I’m sitting outdoors, because bugs and mosquitoes tend to not land on you when there’s a breeze going on. My family, for some reason, strongly believes in the power of citronella candles. There is no proof that they work to keep bugs away, but they might. Who knows? It could work.

I saw recently an article that I thought was a great idea. This summer, I’m making my own citronella-type candles for outdoors. This is obviously a simple vase where I put in lemon and rosemary to smell good. I added oil of lemon eucalyptus — about 5 drops into the water — and oil of citronella directly into the water. By lighting the candle, it will release the oils and might keep bugs away but will also look amazing on your summer table.

So thank you for watching MedShadow TV and go to medshadow.org to find several articles that are in more depth on this particular topic. Anything else?

JB: That’s it. Thank you for joining us.

What Are the Best Treatments for Bug Bites?