How to Shoot Yourself in the Fitbit 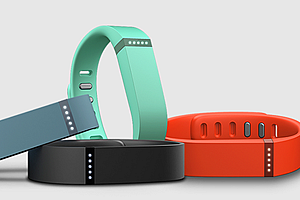 I’m a big fan of Fitbit. It’s a wireless activity monitor that tracks steps walked, stairs climbed, calories burned and quality of sleep. The benefits are increased awareness of activity levels leading, hopefully, to a healthier lifestyle. However, more than 10,000 Fitbit Force users have complained of rashes and burns on the wrist where the Flex rests. The company has denied this is a widespread problem but without more information on the causes of the rashes, some consumers are bringing up fears of carcinogens. Could the plastic from Fitbit, made in China, cause breast cancer?

I bought my well-intentioned but mostly sedentary husband a Fitbit One for Christmas. The first day he wore it he noted the low activity recorded while he was waiting for the bus and decided to walk the mile home. Success!!!!

After a week he asked me to upgrade him from the One, which clips onto clothing or slips into the pocket, to the Force, a watchband type. With either device he can check his activity for the day by glancing at the gadget.

I rushed online to buy the Force Fitbit, keeping the One for myself, and I’m loving it too. I found I could tie my established account on www.MyFitnessPal.com that tracks my nutritional intake with my Fitbit for an accurate calories in/calories out count. I was a health nut goddess and these Fitbit people were geniuses!

I wasn’t the only one who felt this way. Fitbit has a rabidly loyal user base and for good reason. There are reports that the company has actually replaced Fitbits that were lost and ones that were drowned in the washing machine! Fitbit was mentioned at the World Economic Forum as technology that can change your life and connect you to other people. The tiny Fitbit company was trouncing their much larger competitors with a 68% market share, compared to Nike’s Fuelband at 10% and Jawbone at 19%.

On the flip side, there were also reports that last fall, pre-ordered Fitbit Flex’s arrived in the mailbox days after they were in the stores. Growing pains? Maybe. But I had bad experience with customer service also. My husband lost his charger. Getting a replacement charger was a huge deal – they aren’t sold separately in stores and the online price was high, something like $30! Fitbit bungled the order and it took more than a week to get the charger in hand. Still, it’s a great motivator and my husband and I use ours daily.

About 3 days ago a friend emailed me about the Force recall. There were news reports of rashes and burns from the wristband! On March 12th the Consumer Product Safety Commission issued a formal recall of the Fitbit Force because of the numerous complaints of rashes and burns. The Consumerist website (along with others) has published 6 blogs on the Fitbit rashes since the beginning of January 2014. Apparently Fitbit has offered a voluntary recall since February. I bought the recalled Flex from the website in mid-January. They have my eMail and shipping info – why did they not reach out to me directly?

When I went to Fitbit.com to find out more information, there wasn’t any easily available. I entered “recall” in the website search box with no matches. I got to the link from the CPSC site. To save you the trouble, here is the link for the recall form.

Even now Fitbit is claiming that it’s a “tiny” percent of users, 1.7%, who are affected by these burns and rashes. Confusingly, the published numbers for complaints is just over 10,000. With 1,000,000 sold those numbers don’t add up. Are there more complaints or is the company inflating sales numbers? Worse, there are breathless fear-mongering stories on TV and on the internet — like the one on ABC News that quotes users’ fears that the burns and rashes are carcinogenic and might lead to birth defects or breast cancer. (There doesn’t seem to be any foundation for these concerns yet.)

Why is Fitbit letting rumor, fear and the media run away with the story? Why aren’t they taking control? Fitbit — I’m reminding you of the basic rules of PR. The public will forgive you nearly anything if you are honest. If you don’t know what’s going on with the rashes then tell the public what you do know. We love the product, but we won’t come back if you don’t give us a reason to feel that it is as safe as it is effective.