A Man’s Guide to Overactive Bladder 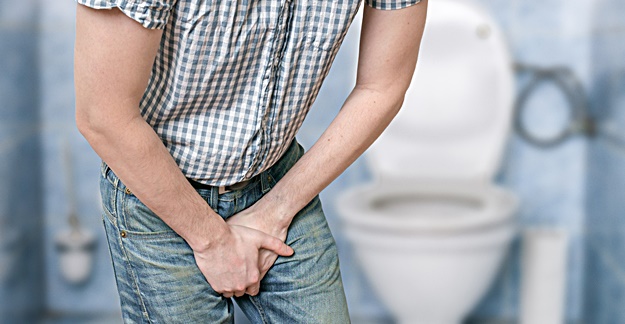 Incontinence and overactive bladder can be potentially embarrassing conditions for men. Before using meds, find out about alternate therapies for relief.

They are problems that many men don’t want to talk about out of potential embarrassment. Still, many men have to contend with overactive bladder and urinary incontinence — in layman’s terms, when control over urination is lost — which can be an indication of bigger problems. Just as important, it can lead to emotional issues and impact a man’s social life.

There are treatment options available for the condition, though many doctors will first turn to prescription medication, especially if the leakage is the result of an overactive bladder. Drugs such as Ditropan XL (oxybutynin), Detrol (tolterodine), VESIcare (solifenacin), Avodart (dutasteride) and Flomax (tamsulosin) are just some of the ones used. But did you known that there are a host of side effects that are associated with them?

If taking medication doesn’t sound like a great prospect to you and the possibility of wearing pads makes you anxious, don’t panic. The good news is there are plenty of non-pharmacological treatments available that have good outcomes with fewer side effects. One of them is even a simple exercise you can do at home. (More on that later.)

But before we get into treatments, let’s start with a primer on urinary incontinence and what could put you at risk for suffering from it.

How Common Is Urinary Incontinence?

Losing bladder control doesn’t commonly occur in younger men, but if you’re an older man — especially over the age of 60 — your chances of developing urinary incontinence increases  (odds around 11-34%) due to associated prostate issues. The National Institutes of Health reports that between 11% and 34% of older men experience incontinence at least occasionally and 2-11% report it is a problem daily.

It can affect your everyday life because if you strain physically, or even sneeze or cough, you could find yourself with leakage in your pants. As a result, you might stop doing things you enjoy, such as socializing or sporting activities. Even sexual encounters can be affected, as position and pressure during intercourse can cause bladder spasm or leakage.

Urgency incontinence, also known as overactive bladder, is involuntary urination or a very strong desire or urgency to urinate.

Stress incontinence is a weakness of the bladder or sphincter muscles.

Overflow incontinence, also known as after-dribble, is a consequence of not emptying the bladder properly.

Functional incontinence happens when you know you need to urinate, but due to mental or physical reasons, such as dementia or impaired mobility, cannot make it to the bathroom in time.

Men with certain health conditions or medical histories are at a higher risk of developing incontinence. Not surprisingly, having any kind of prostate problem greatly increases the chances of having incontinence. This includes having a prostatectomy, a procedure involving the partial or complete removal of the prostate due to prostate cancer.

In addition, radiotherapy, a type of treatment for prostate cancer, can also lead to incontinence. Any irregularities with your urinary tract are also a potential cause.

If you are overweight, you are also at a higher risk. All that extra weight is putting extra pressure on the muscles around the pelvis, weakening them. This can then lead to accidental urine leakage.

Neurological conditions that influence the brain or spine can also spur incontinence. Alzheimer’s disease, multiple sclerosis, Parkinson’s disease and stroke can damage the brain’s ability to control certain functions well, such as urination. If this happens, it is known as neurogenic bladder.

Male incontinence is usually diagnosed after taking a medical history and conducting a physical exam.

“Usually a urinalysis is performed and, depending on the findings of the history and physical, further testing with either x-ray studies or an urodynamics study may be appropriate,” says Karl Kreder, MD, a urologist with the University of Iowa Hospital and Clinics. Urodynamics testing can determine bladder flow, capacity and function.

Other potential tests include a cystometrogram, which measures the bladder’s ability to store and expel urine, or an electromyogram, which looks at the electrical activity of muscles around the bladder.

In some cases, a cystoscopy might be warranted. This test allows a doctor to see inside your urinary tract and can detect if the neck of the bladder is contracted.

Dealing with Overflow Incontinence (aka After-Dribble)

After-dribble/overflow incontinence is where a small amount of urine leaks out after you’ve finished.

The good news is that this type of incontinence responds well to self-treatment. Here are some tips:

If your problem is overactive bladder, a medical professional will likely prescribe you anticholinergic/antispasmodic medications such as Ditropan XL, Detrol, Enablex (darifenacin), VESIcare, Sanctura (trospium) and Toviaz (fesoterodine). The most common side effects of these are dry mouth, blurred vision, constipation, nausea, dizziness, drowsiness and joint pain.

Avodart and Proscar (finasteride), known as 5-alpha reductase inhibitors, are also commonly prescribed for overactive bladder. However, they are associated with sexual side effects, such as erectile dysfunction. A recent study also found that men on Avodart had a higher risk of developing diabetes and high cholesterol compared to those taking another overactive bladder drug, Flomax, which is known as an alpha blocker.

Although an older class, many doctors look to alpha blockers (alfuzosin, doxazosin, prazosin, silodosin, terazosin) as an initial treatment. However, side effects with them include dizziness, headache, stomach problems and reduced semen during ejaculation.

For stress incontinence, you may be prescribed a tricyclic antidepressant such as Tofranil (imipramine) and Elavil (amitriptyline); or selective serotonin reuptake inhibitors (SSRIs) such as Cymbalta (duloxetine). Antidepressants come with some nasty side effects, from constipation to vomiting, weight changes and decreased sex drive.

Alpha-adrenergic agonists are another option and include ProAmatine (midodrine) and Sudafed (pseudoephedrine), which is available over the counter. Common side effects include loss of appetite, insomnia and skin rashes or itching.

Many men with urinary incontinence or overactive bladder turn to medications first, but there are several non-pharmacological interventions available that have fewer side effects.

Although it is best known for its ability to reduce wrinkles, Botox (onabotulinumtoxinA) is also approved to treat overactive bladder with symptoms of urge incontinence. This is because Botox is actually a muscle relaxant.

Alex Shteynshlyuger, MD, a urologist with New York Urology Specialists, says that Botox may be a good treatment option for people who have failed after trying other drugs. He mentioned one study that found that patients who didn’t benefit or couldn’t tolerate oral medications had an average of 5 urinary leakage episodes daily. After Botox, they experienced just 2 episodes a day.

“For most patients, one procedure will last over 6 months, and may even last the full year,” Shteynshlyuger says.

Glutaraldehyde — a collagen-like substance — is an FDA-approved medication that gets injected into the sphincter via a tube inserted in the urethra at 4 sites to bulk it up and decrease leakage. The short-term success rate is good but treatments need to be repeated, which most men find off-putting. Injectables have a 42% dryness rate and a 13% complication rate. This complication typically involves being unable to empty the bladder completely or urinary tract infections.

All the above medications can have more severe side effects, which is why you may want to explore alternative options.

Pelvic floor exercises, also known as Kegel exercises, involve performing contractions of the urethral sphincter muscle several times a day over a period of at least 3 months. These exercises are easy to do, are the most effective way to regain control over your bladder, and are effective for all types of incontinence except after-dribble.

Kegel exercises have also been shown to hasten the time it takes to regain control after prostatectomy surgery, with 55% fewer leakage episodes compared to men who don’t perform the exercises.

To perform the exercises, imagine you’re urinating and want to stop the flow; you squeeze your internal muscle to stop mid-flow.

You’re simply contracting and relaxing the muscles that control urination, in order to strengthen them, and can perform the exercises while lying down, sitting at a desk or standing up. The contractions should be performed several times per day for at least a few months to see if they have any effect.

“Kegel exercises will benefit patients with stress or urge incontinence and are very worthwhile treatments as they have virtually no side effects and a relatively high degree of success,” adds Dr. Kreder.

The video below explains how to perform these exercises in more detail.

Volume-adjustable balloons provide another possible solution. These balloons are placed at the bladder neck and can be air-adjusted, providing an average 50% dryness in those using them.

In recent years, male slings have become increasingly popular for treatment of urinary incontinence because they are highly effective (around 84-92% dryness) and have a high satisfaction rate as well (4.5 on a 5-point scale). A sling is a surgical procedure that suspends synthetic threads above the rectum and under the urethra to provide extra support and relieve pressure. Slings, however, are not appropriate for after-dribble.

There are several types of slings available for men, including the bone anchored sling (BAS), rectourethral transobturator sling (RTS), adjustable retropubic sling (ARS) and quadratic sling. They also come in adjustable and unadjustable. Slings are appropriate for all types of incontinence, except for after-dribble.

If the problem is sphincter malfunction, you can undergo surgery to have an artificial urethral sphincter implanted. Men treated by this method were shown to have an 82% dryness rate and a 23% complication rate, which can be infection, erosion of the cuff or mechanical failure.

The bottom line: If you do find yourself having bladder issues, don’t be embarrassed to seek help.

I wanted to buy adult diapers for my Grandpa who has been facing severe incontinence issues lately. Just wanted to know as to which type of adult diaper would be most effective as well as budget friendly.

such an informative article, thanks for sharing