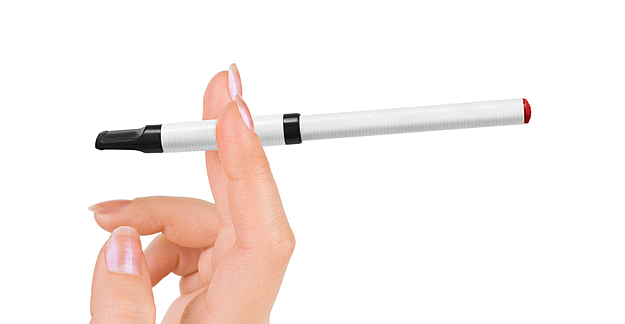 The healthy alternative to smoking? E-Cigarettes the good, the bad, and the nicotine

Lindsay Fox, a 34-year-old writer/blogger in Irvine, California, began smoking at age 27 as a way to reduce stress. Soon Lindsay was smoking 15 to 20 cigarettes a day, a habit she continued for five years. But despite all the things she liked about smoking — the nicotine rush, blowing smoke rings, the “throat hit” she got when inhaling — Lindsay knew cigarettes were propelling her toward an early grave.

As Lindsay was well aware, more than 392,000 Americans die each year from tobacco-caused illnesses, such as coronary heart disease, lung disease, stroke, and cancer, according to the American Lung Association (ALA). Another 50,000 die from exposure to secondhand smoke. Those who suffer from such illnesses often take medication, including beta-blockers to reduce blood pressure, inhaled steroids to relieve shortness of breath and anticoagulants to prevent blood clots. Like most medications, these all cause side effects. For example, beta-blockers have been known to cause dizziness and fatigue while long-term use of inhaled steroids can elevate blood pressure and weaken bones. Anticoagulants can contribute to bruising and excessive bleeding.

Hoping to avoid getting ill or taking medications, Lindsay tried her first electronic cigarette (or e-cigarette) in 2011 and loved it. “The sensation was a lot like smoking” — except better, she recalls. “I still got my nicotine. I could still blow smoke rings. But the feeling on my throat wasn’t as harsh and the flavor was nicer.” Most important, Lindsay felt e-cigarettes were a safer option in that they contain no tobacco and none of the 4,000-plus chemicals present in cigarette smoke. Before long, Lindsay became a confirmed “vaper” (e-cigarette smoker) and kicked the tobacco-cigarette habit for good. As a result, she says, “The smoker’s cough I was developing is gone, I can taste things properly again, and I don’t lose my breath if I have to do anything physical.” These days, Lindsay “vapes” about 2 ml. of liquid a day, which is the equivalent of about 20 cigarettes in terms of nicotine content.

Originally a Chinese invention, e-cigarettes hit the U.S. market in 2006. In simple terms, the e-cigarette is a battery-powered device that resembles a cigarette. It is made of stainless steel and plastic, and has a tiny light at the end that simulates the glow of a lit cigarette. Inside, it has a disposable cartridge that contains a liquid mixture of nicotine, flavoring, and chemicals such as propylene glycol and vegetable glycerin. When a “vaper” puffs on the e-cigarette, the battery powers an atomizer that heats up the liquid mixture and produces a vapor that the user inhales. When a user exhales, a thin cloud of vapor dissipates into the air, like smoke.

Since their entry to the U.S. market, e-cigarettes have grown in popularity. In 2011, the Centers for Disease Control and Prevention (CDC) estimated that 21 percent of adults who smoked regular cigarettes had tried e-cigarettes, up from 10 percent in 2010. Today, there are more than 3.5 million e-cigarette users, with online and retail sales expected to reach $1.7 billion by the end of 2013, according to the Tobacco Vapor Electronic Cigarette Association. What’s more, the market has exploded with 250-plus brands, including those produced by Big Tobacco companies Lorillard (Blu e-cigarettes), R.J. Reynolds (Vuse), and Altria, parent of Phillip Morris USA (MarkTen).

Given the recent growth trends—and aggressive marketing campaigns, featuring celebrities such as Jenny McCarthy and Courtney Love—e-cigarettes are likely here to stay, at least for the foreseeable future. But are they safe, and what are their short- and long-term side effects?

At the moment, no long-term research has been done, but a few new studies appear to offer some promising results. In an independent study, funded by the Consumer Advocates for Smoke-free Alternatives Research Fund, Igor Burstyn, Ph.D., a professor at the Drexel University School of Public Health, in Philadelphia, reviewed the safety of chemicals in the vapor and liquid of e-cigarettes. After assessing dozens of studies conducted worldwide, involving more than 9,000 observations, Burstyn concluded that e-cigarette users are exposed to an insignificant level of contaminants, far below any that would pose a health risk. Burstyn also concluded that e-cigarettes offer no secondhand health risk to bystanders.

Two other studies suggest that e-cigarettes may be an effective smoking-cessation tool. In a study released in 2011, researchers at the Boston University School of Public Health conducted an online survey of 222 first-time purchasers of e-cigarettes. They found that 31 percent of survey respondents reported they had successfully quit smoking six months after buying their first e-cigarette. In comparison, the average six-month abstinence rate for traditional nicotine-replacement products, such as nicotine patches or gum, is between 12 and 18 percent.

In a more recent study, researchers from the University of Auckland in New Zealand recruited 657 participants who were willing to stop smoking. The smokers were divided into three groups: One was given placebo cigarettes with no nicotine; another received a 12-week supply of e-cigarettes containing 16 mg. of nicotine; and the third was given a 12-week supply of nicotine patches with 21 mg. of nicotine. After six months, it was revealed that 7.3 percent of the e-cigarette smokers had kicked the habit and remained smoke-free, while a slightly smaller number—5.8 percent—of those using the patch reported similar results.

But despite the bright news for e-cigarettes, the product has its downsides and its detractors. Early this month, the CDC released the findings of its National Youth Tobacco Survey to some alarm. The study revealed that the use of e-cigarettes among U.S. middle and high school students more than doubled from 2011 to 2012. (The percent of middle school students who tried e-cigarettes rose from 1.4 percent to 2.7 percent, while the number of high school students grew from 4.7 to 10 percent.) Overall, a reported 1.78 million students said they tried an e-cigarette at least once.

While it’s not entirely clear why teens are “vaping” in growing numbers, two factors may be at play. The first is that e-cigarettes come in many flavors—including cotton candy, bubble gum, chocolate, cherry, and mint—that appeal to teens and young adults. Secondly, there are no restrictions barring the sale of e-cigarettes to kids in many states (or online), and the packaging contains no health warnings. What’s particularly worrisome is that “using e-cigarettes can begin kids on a lifelong addiction to nicotine and tobacco products,” says Paul G. Billings, senior vice president for advocacy and education for the ALA, who urges the need for federal oversight of these products. The ALA along with 13 other public health organizations, including the American Academy of Pediatrics and the American Heart Association, recently sent a letter to President Barack Obama asking him to encourage the Food and Drug Administration (FDA) to issue policy guidelines on e-cigarettes sooner rather than later.

Recently, 41 Attorneys General sent a letter to the FDA asking the agency to regulate e-cigarettes the same way it regulates tobacco products. According to news reports, the letter notes that e-cigarettes are being marketed to children through the use of cartoon characters, who promote the kid-friendly fruit and candy offerings. These law officials also note that the health effects of e-cigarettes have not been studied carefully and that the ingredients used in them are not regulated. The Associated Press quotes Massachusetts Attorney General Martha Coakley as saying, “People, especially kids, are being led to believe that e-cigarettes are a safe alternative, but they are highly addictive and can deliver strong doses of nicotine.”

Hopefully, public health advocates like Billings and the Attorneys General won’t have to wait long for government action. The FDA is expected to release some proposed regulations on e-cigarettes, possibly as early as this fall. While the FDA will not comment on the specific contents or timing of the regulations, FDA spokesperson Jennifer Haliski maintains that “further research is needed to assess the potential public health benefits and risks of electronic cigarettes and other novel tobacco products.” Currently the FDA, through the Tobacco Control Act, passed in 2009, has the authority to regulate the manufacture, distribution, and marketing of tobacco products, such as cigarettes and smokeless tobacco, while e-cigarettes presently are free from such restraints. Other governments have been more aggressive, with at least six countries either banning e-cigarettes or placing restrictions on the sale or use of them. Brazil and Singapore have banned them while Austria and New Zealand classify them as medical devices and restrict their over-the-counter sale. France is set to ban e-cigarette smoking in public places, and the United Kingdom plans to regulate e-cigarettes as medicines beginning in 2016.

In the end, the debate over e-cigarettes is far from over. But in the words of Alan Blum, M.D., director of the University of Alabama Center for the Study of Tobacco and Society, in Tuscaloosa: “Thus far, e-cigarettes have not been shown to cause significant harm, and it is likely that they pose a minimal health risk compared to regular cigarettes. Whether they are an effective way to stop smoking is still unknown; and data on the safety of long-term use of e-cigarettes is lacking. But if a person were to choose to smoke Marlboros or to inhale an e-cigarette, there’s no question I’d favor the latter.”

Health and Legal Officials Call for FDA Oversight of E-Cigarettes

E-cigarettes: Are they effective? Are they safe?