Can Her Body Cure Breast Cancer? 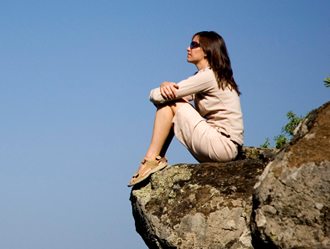 A dear friend entrusted me with the secret that she has been diagnosed with an early stage breast cancer. She has decided not to follow her doctors’ recommendations. After her lumpectomy, she will refuse radiation and chemo. While I don’t agree with her decision to not share the information with many of her family members, I respect her right to privacy. So, I’ll call her “Cary.”

Cary is one of the most medically savvy consumers I know. She nursed her mother through several years of cancers that spread throughout her body until the cancer finally, inevitably, prevailed. She is emotionally supporting (and completely involved in the medical discussions) of a mutual good friend going through a protracted, equally unwinnable battle with cancer. She knows radiation and chemo as well as anyone who has not undergone them personally can.

When Cary told me she was refusing treatment, it took my breath away. I talk all the time about taking full responsibility for your own health care, but the impact of my own preachings scares me. Cary has a good basis for her decision — the cancer the mammographer found is small, the size of the numbers on your credit card, she says. Her family has no history of breast cancer and she reeled off a list of markers that went over my head, but she assured me they were all good, except for one.

We discussed the theory that the body has the ability to spontaneously heal some cancers. I found a study that cautiously concludes that having fewer mammograms results in finding fewer cancers, but doesn’t increase cancer deaths. But neither of us know of any studies specifically on breast cancers spontaneously healing — that’s because they all get medically treated when found. Nobody wants to test the option of watchful waiting for existing cancer on herself. Except my brave and optimistic friend Cary.

Cary not only believes that her body should be given the chance to heal breast cancer, but she also believes that chemo and radiation have the ability to negatively alter her body’s health for decades after the treatment sessions end. She wants a long life, but she also wants as healthy a life as possible.

Cary’s doctors have all given her the advice to follow medical protocol that calls for chemo and radiation after the lumpectomy. There’s a reason it’s medical protocol, it’s been tested and has shown results in getting rid of the cancer. Waiting and watching has not been tested (as far as I can tell). It’s safer to attack the cancer aggressively so that it never gets the chance to spread.

It’s scary to go against mainstream thinking. But Cary feels that an aggressive approach is unnecessary and will potentially ruin the quality of her life. She is using nutrition, yoga and vitamins to maintain her general health and to support her immune system’s fight against cancer. Her personal treatment goals are to create an alkaline environment in her body. She is starving her body of sugar (cancers feed on sugar), stopping hormone replacement therapy (cancers thrive on estrogen) and eat only greens. She’s invested in a Kangen water machine which separates positive and negative ions in the water. By drinking only negative ion water she further creates an alkaline environment in her body. She’s a brave woman and incredibly smart, but is she wise?

I did a little research on the risks of chemo and radiation. The short-term effects are well-known among women of a certain age, the age women either get breast cancer or help their friends through breast cancer (does breast cancer seem a little too common? That’s a blog for another day). The short-term effects occur because the chemotherapy drugs travel through the body killing or causing damage to good cells as well as the rogue cancer ones. The healthy cells most likely to be affected are blood-forming cells in the bone marrow, hair follicles, and those cells in the mouth, digestive tract and reproductive system. Patients are often given more drugs to counteract the chemo side effects. Drugs on drugs. I’m just saying.

As bad as the short-term effects are, Cary is more concerned about the long-term effects. We don’t know all of them, but through internet searches I found that we know chemo drugs can damage cells in the heart, kidneys, bladder, lungs and nervous system. We know about chemo-induced neuropathy (CIPN) where your hands and feet become numb. This leads to difficulty walking, exercising and picking up things. Fine motor skills like those needed to feed yourself are also affected as we have both observed with our mutual friend who is battling cancer now. There are many cases of kidney damage, even failure, and of long-term bladder irritation.

More research dug up the term “radiation recall” – during or after chemo, treatment areas that were treated with radiation might turn red and be itchy with a burning feeling. This could last hours or days. Radiated skin will always be sensitive to sunlight and should always be protected.

While Cary is not concerned with fertility, chemo can reduce the ovaries’ ability to make eggs and hormones either temporarily or permanently. It can stop your period and give you menopause-like symptoms. It will cause vaginal dryness and make you more prone to bladder and vaginal infections. Men have similar infertility issues when treated with chemo and some experience difficulty with erections. Since some chemotherapy agents can be detected in sperm, men undergoing chemo are advised to protect their partner by using a condom.

The American Cancer Society claims that most side effects go away after treatment ends as the healthy cells recover. However, they warn that chemo can cause long-term damage to the heart, lungs, kidneys or reproductive organs. And some types of chemos can cause delayed effects such as a second cancer that may show up years later.

Even with all these long-term possibilities, The American Cancer Society strongly urges consumers not to depend on alternative medicines or vitamin regimens to battle cancer. The website calls them unsupported by evidence, unproven or disproven and claims, “We do know that certain vitamins and minerals can increase the risk of cancer or other illnesses, especially if too much is taken.”

Cary knows what a toll radiation and chemo take physically. Chemo and radiation have improved dramatically over the years but they still compromise the immune system. She is concerned that even if the treatment successfully cures the cancer, it would permanently damage her other systems and hurt her health.

Cary also knows what a psychic toll cancer cures take. She knows too much about it having advocated and cared for her mother and now her friend. She knows the risks, the costs and the benefits. Knowing herself makes her wise.

It’s Cary’s choice. As her friend I immediately wanted her to take every possible action to secure her future health. Cary feels she is doing that.

Cary’s challenges are just starting. She has promised to send in updates from time to time. Please comment on our Facebook page.

MedShadow Foundation does not provide medical advice, diagnosis or treatment. We are not medical professionals, we are only concerned consumers.