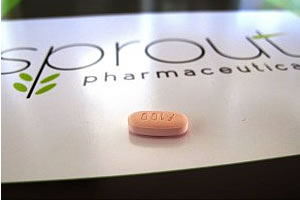 According to the FDA press release, the drug is being approved with a risk evaluation and mitigation strategy (REMS), because an interaction between Addyi and alcohol increases the risk of severe low blood pressure (hypotension) and loss of consciousness (syncope). Health care professionals who prescribe Addyi and pharmacies that dispense Addyi must be certified with the ADDYI REMS Program, and must counsel patients about this risk.

“Because of a potentially serious interaction with alcohol, treatment with Addyi will only be available through certified health care professionals and certified pharmacies,” said Janet Woodcock, M.D., director of the FDA’s Center for Drug Evaluation and Research (CDER). “Patients and prescribers should fully understand the risks associated with the use of Addyi before considering treatment.”

The FDA is also requiring a Boxed Warning, the agency’s strongest caution, to highlight the risks of potentially serious hypotension and syncope if a patient drinks alcohol during treatment with Addyi, in patients who are using medicines or supplements that interfere with the breakdown of Addyi in the body (moderate or strong CYP3A4 inhibitors), and in patients who have liver impairment.

I’m not comfortable with the decision. Here’s why: This was the third time the FDA reviewed flibanserin because the drug failed to meet the FDA’s standard for safety and efficacy twice, in 2010 and 2013, due to side effects. Julia V. Johnson, MD, the panel’s chairwoman, said that “the drug’s impact was ‘not robust enough to justify the risks,’ which include dizziness, nausea and fatigue, particularly with long-term daily use,” according to a report in The New York Times.

In June 2010, the Reproductive Health Drugs Advisory Committee met to discuss the New Drug Application (NDA) for flibanserin and advised that additional data would be necessary to further support its efficacy and safety profile. The FDA issued a “Complete Response Letter” (meaning the drug was not approved) to the drug developer Boehringer Ingelheim at the end of August, and in October, 2010, the company announced the decision to discontinue its development, selling flibanserin to Sprout Pharmaceuticals, Inc.

Early in 2013, Sprout resubmitted the NDA to the FDA, but in December, the agency rejected it again due to safety concerns, particularly related to driving impairment, as 9.8% of women experience somnolence, or sleepiness, while on the 100mg dose.

Leading up to Sprout’s recent resubmission for approval to the FDA (the drug’s third review with the agency), the company partially financed a targeted and sophisticated marketing campaign by a group called Even the Score, http://eventhescore.org/ to set the stage for the “unmet need” for this drug. And Sprout had a lot at stake: $50 million by private investors, according to Forbes.com.

One of the campaign’s mantras was to dub the drug a “female Viagra,” repeating the message that drugs have been approved to enhance male sexual drive, so why not for women?

I strongly object to this gender-based guilt-trip because it’s just not true.

To draw a parallel by calling this new drug the “little pink pill” or the “pink Viagra” is not medically accurate; it’s just marketing hype.

Let’s end that now. Let’s stop that canard. The MOA (mechanism of action) for flibanserin is utterly different — and it has implications. Flibanserin is a brain-altering drug, which has a potentially serious effect on people who take antidepressants, migraine medications or drink alcohol.

Flibanserin has a very different mechanism from any of the approved drugs to treat male erectile dysfunction, which increase blood flow to the genitals, not sexual desire. The side effects of these drugs are known, as they increase the effects of blood pressure lowering medications. They also increases the blood pressure lowering effects of nitrates that are used primarily for treating angina. https://www.viagra.com/learning/what-are-possible-side-effects
Another difference is that flibanserin must be taken every day to be effective, while Viagra can be taken as needed and starts working within an hour. And unlike Viagra or any drugs to enhance male sexual function, flibanserin http://www.flibanserin-hsdd.com/ is the first drug to address the sexual process through brain chemistry, where side effects are less understood and more difficult to predict.

“I think it’s a catastrophe. It’s a superficial, quick-and-dirty term,” said Leonore Tiefer, MD, a psychologist at New York University School of Medicine, who spoke to the International Business Times after the advisory committee meeting in June 2015. “Any drug that’s going to be proposed for female sexual problems is going to be called female Viagra because of the wild success of Viagra, but it’s so different.”

Understand the Serious Side Effects

Let’s put this in perspective; the drug was tested in a specific population of 3,500 premenopausal women in their mid-30s and 89% of trial enrollees were Caucasian. Almost 66% experienced side effects of hypotension (low blood pressure), syncope (fainting), dizziness, somnambulence (drowsiness), nausea and headache, as well as accidental injury, when taking a 100 mg tablet.

In addition, the FDA advisory committee, which met in June 2015, was concerned about other potential dangers:
— An increase in dizziness in women who were also taking tryptophans (migraine treatments), SSRIs and SNRIs (depression treatments), and antihistamines (allergy treatments).
— Many common drugs will increase flibanserin levels beyond tolerable doses. For example, oral contraceptives increase flibanserin levels 42%. Triptans, used to treat migraines, increase flibanserin 4.5-fold. Ketoconazole, a common antifungal, increases drug levels 7-fold, and fluconazole, another antifungal, increases levels 4.6-fold. Flibanserin negatively affects the enzyme CYP3A4, and many other drugs besides ketoconazole and fluconazole inhibit this drug-metabolizing enzyme, including antibiotics (clarithromycin, telithromycin), hepatitis drugs (telaprevir), anti-HIV drugs (ritonavir, saquinavir, nelfinavir, lopinavir), and grapefruit juice.
— An increased risk (4x) of breast cancer, according to a small study in mice, which raised a red flag, although some experts testified that use of the drug for a year was not enough time to adequately assess risk.

I admit I was a skeptic about the need for this treatment until I listened to the impassioned pleas from women, their partners and their physicians, who testified before the June 2015 FDA panel.

A patient in the trial said that taking flibanserin worked for her “as if a light switch had been turned on.” She added, “I should be able to determine with my physician the risk of flibanserin against the benefit of treatment.” Another woman hammered the point home, saying: “Women are intelligent and insightful decision-makers and can be trusted to evaluate the risk of side effects vs. benefits.”

Yes, there is an unmet need. Yes, the drug seems to be effective. Yes, women know how to make intelligent choices — with the help of accurate information.

Cindy Pearson, executive director of the National Women’s Health Network, said: “If a company could show that a drug is effective based on clinically significant outcome measurements, then we’d be for it, but this study has not been done. Women can make good decisions if they have good information. Sprout has not provided it.”

Here’s my real concern: Has the FDA based its decision on clinical trial results – or did the agency and its expert panelists feel pressure from the marketing hype?

Dr. Tiefer described Even the Score’s campaign as a “relentless pursuit of doctors — using slick marketing materials, fancy luncheons and misinformation in order to lobby for questionable products, bully the FDA, and hamper research.”

Opening the Door to Off-Label Prescribing

Now that flibanserin is approved, docs can use it off-label — a concern of the advisory committee. Recent research from the National Institutes of Health found that more than half (6 in 10) of women over age 60 who are in committed relationships are sexually active. It’s possible that a drug to enhance a woman’s sexual desire may have an appeal for this group. But flibanserin wasn’t tested on their demographic. So there is no evidence that this new drug works or is safe in this population.

I am 60 years old. I am in a committed relationship. But this pill is just too hard for me to swallow. I would like a treatment that is marketing-free. I would like an approval based on hard science, not male guilt. And I would like a drug developer who thinks of patients before blockbuster sales totals.

6 Foods & Drinks that Can Boost or Bust Libido