How Disease Awareness Ads Can Lead to Overtreatment 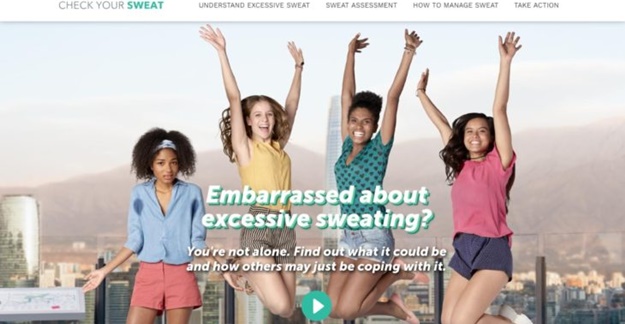 Do you sweat too much? Is deodorant not cutting it for your underarm odor? If you answered yes to these questions, would you want to take a medication to stop it? Dermira, a drug company, wants you to know there are treatments available for the “condition”, which is formally known as hyperhidrosis. In fact, they’ve created a whole website created around hyperhidrosis, Check Your Sweat.

The website is known as a disease awareness ad. But don’t fall for it — or other similar ads. While at face value it may seem a way to learn more about hyperhidrosis, the purpose of the site is to get patients who may think they are sweating too much to talk about the condition with their doctor, who may eventually prescribe you Qbrexa, a newly approved prescription medication wipes that help to cut down on excessive sweating, made by – you guessed it – Dermira. It’s what I like to call a back-door drug ad and they make me angry.

Pharmaceutical companies are increasingly turning to these kinds of ads and for good reason. Traditional drug ads that explicitly mention a drug’s name and the condition it is used to treat are subject to strict rules that require a fair balance of a drug’s benefits and risks. These so called “unbranded” drug ads skirt such rules, and allow them to engage what some critics consider disease mongering as a result.

During last week’s Too Much Medicine conference in Helsinki, Finland, Lisa Schwartz, MD, MS, co-director of the Center for Medicine and Media at the Dartmouth Institute, explained why disease awareness ads work well. They do several things: They portray the condition as common; give it a new name; position it as a real medical condition; claim it is underdiagnosed; and destigmatize the condition. They often also include assessments (“Take this Quiz!”) for a patient to take to see if they have the condition.

She added that drug companies love disease awareness ads because they help to blur the line between marketing and public health messages and they prompt more visits to the doctor, where inevitably a patient may ask their doctor for a prescription for a drug that treats the condition. They also tend to expand disease definitions resulting in the “overmedicalization of mildly unpleasant life conditions.”

Spending on these disease awareness campaigns has skyrocketed. In 1997, about $171 million was spent on them, according to data from Kantar Media cited by Schwartz. In 2016, it was $430 million.

There are plenty of downsides to these ads. As Steve Woloshin, MD, MS, co-director of the Center for Medicine and Media noted at the conference, they can create excessive fear, exaggerated perceptions about a disease’s risk and intervention, and perhaps worst of all, lead to overdiagnosis and overtreatment.

Schwartz mentioned that the Federal Trade Commission has never taken any action against a drug company for a disease awareness campaign. The FDA has been rather silent too. That’s not surprising. In 2004, the agency issued a draft guidance on disease awareness campaigns. But in 2015, they withdrew it. A June 2017 article from The Pink Sheet says the FDA has no plans to issue new guidance on the campaigns.

That’s unfortunate. The FDA has an opportunity to reign in a form of drug advertising that clearly takes advantage of a lack of regulations potentially to the detriment of patients. It should look at finding ways to curtail the growth of them as soon as possible.