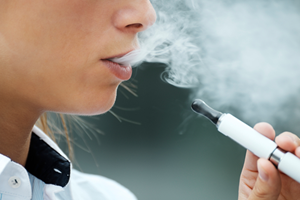 Are e-cigarettes a godsend saving millions from lung cancer or the latest way for evil cigarette companies to hook a new generation on candy flavored nicotine products? Depending on your perspective, the answer is yes.

New studies are published weekly supporting and denigrating e-cigs. Unfortunately before they are even published, these reports are out-of-date. In short succession we have gone from hookahs to e-cigs that look like cigarettes, to tank system e-cigs (which burn much hotter) and the newest fad — dripping, a system of literally dripping nicotine on hot coils. Each step ramps up the amount of nicotine entering the body and the amount of heat used.

E-cigarettes have many supporters — not the least are smokers who have been able to switch from smoking to vaping. Because the heat creates a “vapor” of the nicotine, the 69 carcinogens known to be created by burnt tobacco are avoided. There are concerns that e-cigs and “dripping” at high heat levels might be creating carcinogens. However, at lower heat levels, vaping appears to be much less dangerous than smoking.

More benefits? E-cigs cost less than regular cigarettes, approximately $400 a year less (based on a annual cost of smoking of $1,000). And secondhand smoke from vaping seems to be less toxic than that of cigarettes.

I asked MedShadow followers on Twitter and Facebook if they have tried e-cigs and what their thoughts were. Most of the responses were in favor, particularly as a way to avoid cigarette smoking. Here are some samples:

“2+ yrs, feel great, enjoy them greatly, 1 cold since vaping when I had them 3x/yr before.”

“Smoke free for 2 yrs. No bronchitis, no sinus infections, no antibiotics. Used to get sick 3+x a year. eCigs changed my life!”

One person tried e-cigs and backed off:

“Ended up vaping constantly because I could smoke inside. Went back to normal smokes to cut down on the nicotine!”

E-cigs use liquid nicotine which is a dangerous neurotoxin. It’s so potent that spilling a small amount onto the skin can cause seizures and vomiting. Dripping it onto a heat source “can change the composition of e-liquids, creating new chemicals. Importantly, the researchers said, the chemical reactions apply not only to the liquid nicotine, but also to two other crucial ingredients in most e-liquids: vegetable glycerin and propylene glycol,” reported the New York Times.

Just having e-cigs around a child is dangerous. Calls to poison control centers about exposure to liquid nicotine have increased every month from 2010 to February 2014 — 51% of the calls now have to do with children under 5 years old. Ingesting less than a teaspoon can kill a child.

According to HowStuffWorks.com, “Despite the marketing claims that e-cigarettes are safer than smoking tobacco, researchers are finding e-cig users experience diminished lung function, airway resistance and cellular changes, regardless of whether or not they currently (or ever) smoke cigarettes. And in the lab, cells exposed to e-cigarette vapor show unhealthy changes similar to cells exposed to tobacco smoke [source: Park et al]. Users who vape nicotine-free e-cigs can’t escape the effects, either; they also experience airway resistance and other signs of inflammation as side effects of e-cigarette use.”

It’s concerning that e-cig users are already tinkering around with the mechanisms. Tank systems burn hotter and dripping confers the hottest temperatures of all. Why do users keep going further? The goal seems to be to get a better vapor production and “throat hit,” to quote the E Cigs Academy. As a non-user, I wonder if this is indicating a need to feed growing nicotine addictions.

When will we know the real risks of vaping? Not until it’s too late. “Technology is way ahead of the science. We’re creating this stuff, and we don’t understand the implications,” said Dr. Alan Shihadeh, a project director at the Virginia Commonwealth University’s Center for the Study of Tobacco Products quoted in an article in the New York Times.

To vape or not to vape? Don’t wait for definitive studies that may never get published. Instead, consider the risks and the benefits. Apply it to your unique situation. And remember, e-cigs are better than cigarettes, but it’s clear we are playing with fire.-