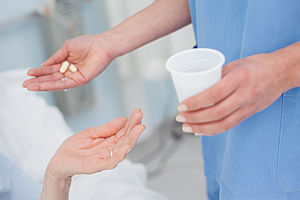 The FDA has been in overdrive lately, fast-tracking approvals to encourage scientific development in the name of “innovation.” But the impact on patients isn’t always clear. Especially for people with cancer.

The FDA’s recent approval of panobinostat, marketed as Farydak, to treat a rare form of blood cancer called multiple myeloma, caught my eye because I have a personal stake in this game. I help take care of my mother, who has a blood cancer and my sister, who has advanced lung cancer and is in a clinical trial for an experimental treatment. I have seen the effects of their treatment. For my sister, tumors are now almost non-existent, while my mom was given the ability to live an independent life at age 93. In layman’s terms, the progression of their disease has slowed or stopped. Knock on wood.

I have also seen the less celebratory consequences during the days following their treatments.

Mom gets a weekly shot of Procrit, a red blood cell booster, as she cannot tolerate Revlimid (lenalidomide), the standard drug for her condition, a myelodysplastic syndrome. She calls Procrit her “gorilla juice,” and she does have more energy after the shot, so she can get up and down the stairs, stand at the stove to cook, and even get into the garden with her walker to prune the boxwood.

My sister, age 70, on the other hand, takes a cocktail of targeted therapies, including Erbitux (experimental in lung cancer) and Avastin. She suffers terribly from a common side effect:  angry rash all over her body, including the inside of her mouth. It hurts to eat anything with hard edges, like a crusty Italian bread. She has lost fine motor coordination in her hands, so she may drop a glass or have trouble untying knots. Sores on her feet don’t heal well. I saw her fall once, even though she is exceedingly careful. She was okay, but I felt so helpless as I tried not to notice her fight back tears of frustration.

My sister’s side effects are standard for many people undergoing cancer treatments. The amount of time it takes for these powerful drugs to be administered can also prove problematic for patients. My sister’s weekly infusions along with big doses of magnesium, take only 4 to 5 hours now, a timeframe that seems a lot shorter than the 8-hour stints she was tolerating when she also had chemo. Several times I sat with her through two shift changes of the oncology infusion teams.

The Advisory Panel Votes No — But the FDA Overrules

So the FDA’s recent approval of Farydak for patients with relapsed multiple myeloma, a rare and hard-to-treat blood cancer, caught my attention because it went against the recommendation of the Oncologic Drugs Advisory Committee (ODAC) last November, which voted 5-2 against approval.

The reason for the panel’s rejection: severe side effects, including diarrhea, tiredness, nausea, swelling in the arms or legs, decreased appetite, fever, vomiting and risk of bleeding, to name a few.

While ODAC members remarked on the drug’s potential benefits, they also criticized the drug developer, Novartis, for shortcomings from the company’s clinical trial data and added more time for review, thereby slowing the approval process and increasing the company’s development costs.

Subsequently, Novartis submitted additional information supporting the drug’s use for a different indication: patients with multiple myeloma who have failed at least 2 prior standard therapies.

The FDA considered this additional evidence for the changed indication and determined that Farydak’s benefits outweighed its risks because outcomes were significant. Participants receiving the Farydak combination saw a delay in their disease progression (progression-free survival) for about 10.6 months, compared to 5.8 months in participants treated with bortezomib and dexamethasone alone. Additionally, 59% of Farydak-treated participants saw their cancer shrink or disappear after treatment (response rate), versus 41% in those receiving bortezomib and dexamethasone. Even so, the label for Farydak carries the FDA’s most pronounced warning — a black-box — tied to the potential for severe and fatal cardiac side effects.

The FDA doesn’t have to follow its expert advisory panels, but they usually do. So why the reversal?

Surviving blood cancer is a long shot, so many patients are willing to tolerate painful side effects. Also, regulators and doctors are eager to encourage companies to develop treatments that act on a disease in a brand new way. It’s considered a “win” for science.

Farydak accomplishes this by inhibiting the activity of enzymes, known as histone deacetylases (HDACs). In an FDA statement on February 23, 2015, Richard Pazdur, MD, director of the Office of Hematology and Oncology Products in the FDA’s Center for Drug Evaluation and Research, said: “Farydak has a new mechanism of action that distinguishes it from prior drugs approved to treat multiple myeloma, making it a potentially attractive candidate agent for the treatment of multiple myeloma. Farydak’s approval is particularly important because it has been shown to slow the progression of multiple myeloma.”

The approval was based on the decision of a team of experts at the FDA, but Dr. Pazdur may have been a key influencer. He is known for his “penchant for rapidly approving cancer treatments that could improve the standard of care for some of the most dire patients,” according to a recent article from FierceBiotech.

While there is potential pay-off for the pharma company, the approval process isn’t easy, especially for these novel drugs. Forbes reported in 2013 that, on average, research and development of a new drug takes about 10 years and costs millions, even billions of dollars — with no guarantee of approval: “19 in 20 medicines in experimental development fail, meaning a great many companies fail too.”

Hurrah for innovation!  I believe that scientific discoveries open doors to new treatments. And we all know loved ones who need new effective treatments.

But as the FDA leans in to fast-track these novel drugs, patients and their medical teams must also be quick to question their oncologists about how to handle the side effects. The challenge is to know how to weigh the risks and benefits of a drug, particularly a new one.

Novartis is now required to conduct confirmatory trials to verify and describe the clinical benefit of Farydak. The agency also required the company to provide a Risk Evaluation and Mitigation Strategy (pdf) with detailed information about risks.

These cautions supplement the standard information the FDA requires the drug developer to provide: the package insert or prescribing information (the fine print inside drug packaging); a print-out from the pharmacy; and a Medication Guide, for some drugs, which should be available for all patients, who can ask a pharmacist or healthcare professional to provide one.

The FDA updates its MedWatch website for safety information about adverse events and new safety warnings. The agency also posts drug safety notices, indicating changes to the label and shortages.m

Most importantly: don’t be afraid to ask questions. Be the squeaky wheel. It may be you or a loved one who will be sitting in the infusion chair and later at home suffering the real side effects of the treatment. But if in the long run the treatment helps to prevent the disease from intensifying, the benefits of the drug may just outweigh its drawbacks.

It helps me to look at the big picture when it comes to thinking about the challenging side effects of cancer and other drugs. I hear a lot about “staying in the moment,” but for me, the “moment” means having to watch people I love suffer with side effects. So I think about the longer term, and I am hopeful!

Corticosteroids Are Bad for Bones (and Health)