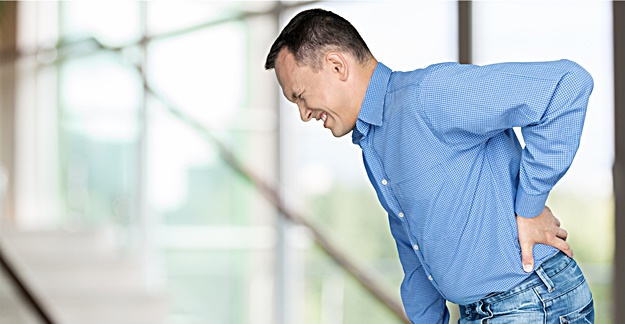 Back pain is the most common kind of chronic pain. It’s also a near-ubiquitous form of acute, short-lived pain after a minor injury, a bit too much exercise, lifting something the wrong way, a stressful day at the computer or an encounter with a bad bed.

In one survey, a quarter of adults reported having low back pain lasting at least one day in the past 3 months. But over the long term, we all fall victim.

For decades, the prevalent response to a bout of back pain — acute or chronic — was to reach for the pill bottle. Over-the-counter pain relievers mostly, like Advil (ibuprofen), Aleve (naproxen) or Tylenol (acetaminophen).

But in recent years, more and more people with back pain have been prescribed opioid painkillers. At the same time, doctors have sharply escalated their use of CT and MRI scans for people with back pain. A 2013 study of back pain treatment in JAMA Internal Medicine, for example, found that between 1999 and 2010 prescriptions for powerful narcotic pain meds increased by 51%, the use of CT and MRI scans jumped by 57%, and referrals to surgeons, neurologists and other specialists more than doubled.

As a result, public health authorities, physician groups and pain management experts are taking serious aim at the overuse of narcotic painkillers and imaging tests in people with back pain.

Non-Drug Measures for Back Pain Relief

New treatment guidelines strongly recommend that people with back pain first try non-drug measures such as yoga, physical therapy, chiropractic and massage before resorting to over-the-counter or prescription pain relievers.

The guidelines come from a team of experts convened by the American College of Physicians. They were published in February in the Annals of Internal Medicine. The expert group — comprised of leading back pain specialists and front-line docs — evaluated 46 recent studies on back pain and medications and 114 studies of non-drug approaches.

Importantly, the researchers found no evidence that any of these techniques is better than any other; it’s a matter of personal preference and what works for your pain and in your life.

If the source of the pain is an acute injury (that is, it’s of sudden onset and has lasted less than a few weeks), try an over-the-counter nonsteroidal anti-inflammatory drug (NSAID) first. Ibuprofen works as well as the others for most people, and is inexpensive. Naproxen is another alternative.

If the pain is particularly bad — preventing you from working, sleeping or functioning normally — you can also try a muscle relaxant. But limit the use of it to a week at most. Muscle relaxants like Flexeril cause drowsiness and sedation and can be habit forming.

Based on the latest research, the group concluded that acetaminophen is not effective for acute back pain, especially if the pain is related to an injury that causes inflammation. Unlike the NSAID drugs, acetaminophen does not reduce inflammation.

The expert guidelines also advise against steroid injections, citing the lack of evidence that this approach is helpful.

If you have chronic back pain and non-drug techniques don’t provide relief within a week or two, the guidelines recommend NSAIDs as the first-line therapy. If they don’t do the job, talk with your doctor about tramadol, Cymbalta (duloxetine) or a muscle relaxant.

Tramadol is a low-strength opioid with less risk of side effects, abuse and addiction. Duloxetine is an antidepressant proven effective against some kinds of pain.

About other, stronger opioids, the new guidelines say: “Clinicians should only consider opioids as an option in patients who have failed [other] treatments and only if the potential benefits outweigh the risks for individual patients and after a discussion of known risks and realistic benefits with patients.”

Indeed, the back pain experts emphasize that opioids have not been shown to relieve chronic back pain over the long term without significant risk. Namely, too many people end up taking higher doses to get the same pain relief. As a result, they put themselves at higher risk of addiction and its well-known adverse consequences.

A recent meta-analysis in JAMA Internal Medicine that included 20 trials involving 7,300 patients found that opioids didn’t provide significant relief for people with chronic back pain. Further, half the participants dropped out early because the medication didn’t work or the side effects were intolerable.

In contrast, a survey of 3,562 adults by Consumer Reports found that almost 90% of people who tried yoga or tai chi said these practices were helpful against back pain, and about 80% said the same of massage and chiropractic. Even so, about a third of respondents said they took prescription drugs for their back pain, and of those, 57% were prescribed opioids at some point.

“Many physicians who are used to writing prescriptions right off the bat or sending patients for tests are going to have to rethink the way they manage back pain,” says Nitin S. Damle, M.D., former president of the American College of Physicians.

Consumer Reports’ June 2017 cover story is on back pain and draws on the new guidelines, its survey and recent research.

Among the tips from the ACP guidelines and Consumer Reports:

✔ You don’t need to see a doctor if your back injury is minor. The vast majority of injuries and tweaks of the back heal on their own. But be patient. It may take a week or 2 or even 3 in some cases. If the pain worsens over time or fails to ease, do see a doctor.

✔ If your pain is radiating down one leg, see a doctor. This can indicate that a nerve is involved.

✔ Be judicious with how much ibuprofen and naproxen you take. Don’t exceed 1,600 milligrams (8 200mg pills) of ibuprofen a day or 1,000mg of naproxen a day. Limit use of both to 7 days. They both carry risks if taken at high doses for long periods.

✔ Personalize your treatment plan. Everyone responds to pain differently, and there’s no set strategy for treating back pain that works for everyone.

✔ The National Center for Complementary and Integrative Health, or NCCIH, can recommend a practitioner. The UCLA Mindful Awareness Research Center offers free online mindfulness and relaxation programs. And if you decide to try acupuncture, check that your practitioner is certified by the National Certification Commission for Acupuncture and Oriental Medicine.