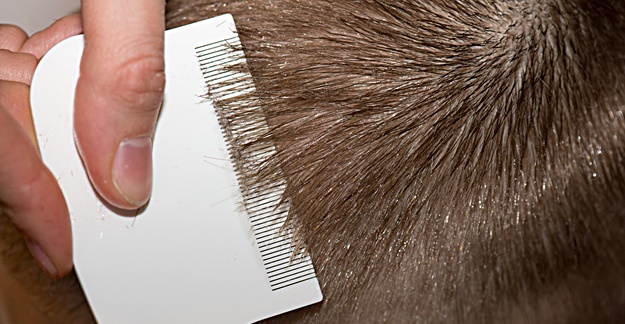 Lice! Few notes from school cause such universal dismay as the one alerting parents to a lice outbreak.

For healthy people, lice aren’t a serious health threat. Lice don’t carry disease and they aren’t a marker of an unclean home. However, the sight of a louse on a child’s head can turn the stomach of even the sturdiest parent.

What’s the safest, fastest and least disgusting way to get rid of lice? I asked a lot of parents and found an excellent review of research that much of this article is based upon.

I found that there are several options. Many are useful, but none are 100% effective. If the first method of lice removal/control fails, don’t use the same product as a follow-up. It could be the product was applied incorrectly or at too low a dosage or another reason. But in any case, it encourages the survival of resistant lice. If a second round is needed, choose a different medicine for the second treatment.

A lot of parents will be drawn to the many promises of “all natural” shampoos with essential oils. Although this may give the impression these products are safer, they can still be harmful.

“Many people think essential oils are harmless because they are natural and have been used for a long time. In some cases, that is simply not true,” according to Poison.org. “Many essential oils can cause rashes if used on the skin. Many can be poisonous if absorbed through the skin or swallowed. Few have been tested like medicines have, even though people put them in their mouths, on their skin, and in their children’s vaporizers.”

The AAP (American Academy of Pediatrics) recommends the ingredients found in the over-the-counter products RID and Nix (1% permethrin or pyrethrins). My contact who works in the ER at Bellevue Hospital in New York City agreed. They use it routinely for the many homeless people who arrive with serious issues, but also head lice. Uncontrolled lice on generally unhealthy people such as the homeless can cause anemia, so the ER is quick to treat it.

RID, Nix and the medicines in them haven’t been clinically tested for safety, but the AAP recommends it anyway based on decades of use without discernable harm. Most side effects are limited to scalp or eye irritation.

The effectiveness of permethrin has been declining for the past 20 years. This is almost certainly from overuse. For many years, RID and Nix were the only treatments commonly used and lice are developing a resistance to it.

Despite the comfort level the medical community seems to have with RID, my casual survey of friends and family didn’t turn up 1 person who uses RID today (outside of the ER). The two choices most parents waffle between are: 1) Combing the lice and nits out by hand, using a nit comb and a thick, white hair conditioner that will help the parent spot lice; or 2) Calling the Hair Faeries.

Rather than celestial beings with wands who flit through windows, these Hair Faeries are a company that will come to your home with a patented product and make those lice disappear. Head Faeries claim their ingredients are completely natural. The primary ingredient (after water) is tea tree oil (melaleuca alternifolia). There is no clinical proof that tea tree oil is effective and there have been no tests on the long-term effects of rubbing it into a child’s scalp. The second ingredient listed, cyclomethicone, is a silicon-based cyclic compound. The EWG (Environmental Working Group) lists it with a moderate concern of toxicity.

An alternative to Head Faeries is LiceEnders,
another company that will come to your home to battle the lice. LiceEnders also has a proprietary product that they claim is “nontoxic, all natural, and hypoallergenic.” I called the number on the website to ask about the ingredients. The first call I was put on hold for about 8 minutes until I gave up. I tried back and was given an eMail address that didn’t work. So, I don’t know what’s in their product.

Certainly, there are other professional options.

Natural Remedies and the “Resurrection Effect”

Petroleum jelly (Vaseline), olive oil, and mayonnaise have not been studied in controlled studies, but research following use in the home shows that they are each ineffective. Interestingly, applying Vaseline, olive oil or mayo can make lice look dead because it lowers metabolic activity, but the lice awaken after a short time. That’s called the
“resurrection effect.”

ClearLice treatment products are sold online. The website claims it is made of “natural ingredients, botanicals, enzyme complexes, and plant extracts. They work with one another to mimic the molting process of head lice to disrupt their life cycle.”

The first ingredient was enzyme proteins that they say “break down and digest the nit glue and break open the protective shells of the lice and nits.” The other ingredients are tree oils and other essential oils.

I wonder, does the enzyme, powerful enough to digest nits and lice, have an effect on the scalp? I worry that essential oils, which can be very powerful on a child’s thin-skinned scalp, would be even stronger on skin exposed to digestive enzymes. I posed that question to “Ariel” at customer support chat line. I haven’t received an answer yet.

Until recently the only other medicine-based options were lindane and malathion. Both have significant safety issues. One is flammable (!) and both stink.

For those disposed to use medicated shampoo, prescription drug Sklice (ivermectin) appears to be a good option. Topical ivermectin is effective without combing for nits. It seems to have few side effects, such as possible redness of skin, eye irritation, swelling.

Two new medicines have recently been approved for treating head lice: Benzyl alcohol and Natroba (spinosad). Benzyl alcohol is available only by prescription, is applied topically and kills only the living lice, not the eggs. Spinosad is an organic active ingredient, produced by fermentation that Is effective without common side effects and does not require combing out of the nits.

A final thought. One mother told me that “lice don’t like rosemary.” So, she found hair conditioner with rosemary in it for her family to use with every shampoo. She claims they never had a lice problem. Comb, medicated shampoos, rosemary conditioner or call in the pros, it’s your decision.