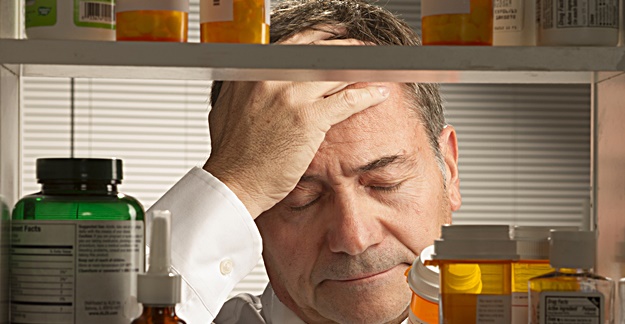 A growing number of Americans have become seriously ill due to unintentional medication errors at home – such as taking the wrong medication, the same drug twice or the wrong dosage.

Overall, there were 67,603 incidents of “serious medical outcomes” that resulted from unintentional drug errors during the 2000-2012 period. One-third of the errors resulted in hospitalization.

Most of those errors – 93.5% – resulted in a moderate impact on the patient’s health. However, 5.8% resulted in a major effect and 0.6% (414) resulted in death. The most common symptoms reported were an increase in drowsiness or lethargy, an unusually fast or slow heartbeat, dizziness or vertigo.

The drug class most likely to result in a medication error were cardiovascular drugs, such as beta blockers, calcium antagonists and clonidine. These represented 21% of the errors, followed by painkillers (12%), especially opioids and Tylenol (acetaminophen), and hormone/hormone antagonists (11%), a category that includes insulin. Cardiovascular and pain drugs accounted for a majority of the fatalities.

The researchers noted that one of the reasons for the dramatic rise in medication errors requiring medical attention was an increase in prescribing of cardiovascular drugs, opioids and insulin over the period studied.

“Drug manufacturers and pharmacists have a role to play when it comes to reducing medication errors,” co-author Henry Spiller, MS, D.ABAT, director of the Central Ohio Poison Center at Nationwide Children’s, said in a statement. “There is room for improvement in product packaging and labeling. Dosing instructions could be made clearer, especially for patients and caregivers with limited literacy or numeracy.”

The researchers also provided a few tips to prevent medication errors at home: