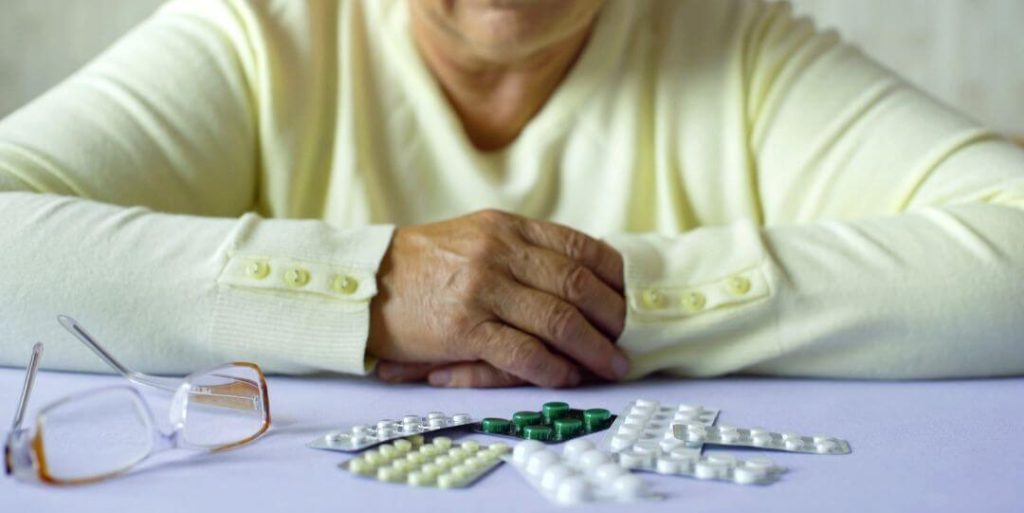 There are no drugs that cure Alzheimer’s disease, but there are some that help delay the onset. Sadly, these drugs have been called “high risk, low benefit” by some experts.

Aricept is a medication to reduce symptoms associated with Alzheimer’s disease. Some side effects of Aricept include nausea, vomiting, diarrhea, muscle cramps, fatigue, and weight loss. An individual should stop using Aricept if he or she experiences black, bloody, or tarry stools, coughing up blood or vomit that looks like blood, painful urination or seizures.

Razadyne works by restoring the balance of neurotransmitters, which are chemical messengers, in the brain. Common side effects of Razadyne are nausea, vomiting, diarrhea, weight loss, and decreased appetite. Stop using Razadyne and call your doctor if you experience chest pain, blood in your urine, coughing up blood, urinating less than usual or not at all, or weakness.

Exelon is a cholinesterase inhibitor for patients with mild to moderate Alzheimer’s disease. The most common side effects of Exelon are nausea, vomiting, diarrhea, weight loss, decreased appetite, and muscle weakness. Stop using Exelon and consult your doctor if you experience stomach pain, black, bloody, or tarry stools, coughing up blood, fainting, chest pain, or pain when you urinate.

Namenda regulates glutamate activation, which is crucial for cognition and memory, and treats symptoms of moderate to severe Alzheimer’s disease. Some common side effects include dizziness, headaches, diarrhea, constipation, and confusion. Stop using Namenda and call you doctor if you experience chest tightness, hallucinations, sudden numbness or weakness, lack of coordination, seizures, or easy bruising or bleeding.

Namzaric is a combination of Namenda and Aricept. The side effects seen with Namzaric are similar to what would be seen with either Namenda or Aricept.

Doctors typically start patients at low doses of the drugs and gradually increase the dosage to monitor how well a patient tolerates the drug. It’s important to follow the doctor’s instructions when taking any medication. Patients should report any unusual symptoms to their doctor right away.

A synergistic effect may be expected when cholinesterase inhibitors are given concurrently with succinylcholine, similar neuromuscular blocking agents, or cholinergic agonists such as bethanechol.

Namenda is known to interact with many drugs, including:

Always discuss with your doctor or pharmacist all the medicines, herbal supplements and even vitamins you are taking to avoid drug interactions.

While there is no cure for Alzheimer’s disease, the medications approved by the FDA can treat symptoms of Alzheimer’s and provide patients with comfort and independence for a longer period of time.

There is no published study that compares the 4 drugs mentioned above for Alzheimer’s. However, because the drugs work similarly, there is an understanding that switching from one drug to another will not produce significantly different results. Keep in mind, however, a patient may respond better to one drug versus the other.

In February 2017, researchers reported that Aricept should not be prescribed to patients with mild cognitive impairment until a genetic test is done. The reason is that the drug can accelerate cognitive decline in people with a certain genetic variant.

Exelon appears to be beneficial for cognitive function and activities of everyday living. This medication can be taken orally or transdermally, but the transdermal patch has fewer side effects than the capsules.

According to some consumer advocacy groups, Alzheimer’s meds have a high risk and minimal benefit. They say the side effects of these meds are not worth the small benefit they offer.

An increasing number of alternative therapies for Alzheimer’s disease are promoted as memory boosters or delaying the progression of the disease. None of these claims have been proven, but they are based largely on testimonials or anecdotal evidence.

Caprylic acid, a medium-chain triglyceride (fat), is produced by processing coconut oil or palm kernel oil. In theory, the body breaks down caprylic acid into ketones which act as an alternative energy source for brain cells that no longer have the ability to use glucose due to Alzheimer’s.

Omega-3s are a type of polyunsaturated fatty acid, and research suggests that certain types of omega-3s can possibly reduce the risk of dementia or cognitive decline. Omega-3 supplements are widely available.

Cholinesterase inhibitors like Aricept, Exelon and Razadyne are prescribed for mild to moderate Alzheimer’s disease to help delay or prevent symptoms from worsening, though only for a limited time. Scientists are not exactly sure how cholinesterase inhibitors work to treat Alzheimer’s, but research shows that these medications help to prevent the breakdown of acetylcholine, a brain chemical important for memory and thinking.

Namenda is an N-methyl D-aspartate (NMDA) antagonist prescribed to treat moderate to severe Alzheimer’s disease. This drug is believed to regulate glutamate, an excitatory neurotransmitter in the brain. It is  believed that too much stimulation of nerve cells by glutamate may be responsible for the degeneration of nerves that occur in Alzheimer’s and other neurological disorders. Often times, NMDA antagonists and cholinesterase inhibitors like Namenda and Aricept can be prescribed in combination to treat moderate to severe Alzheimer’s disease.

How do opioids affect the brain and body? (National Institute on Drug Abuse)