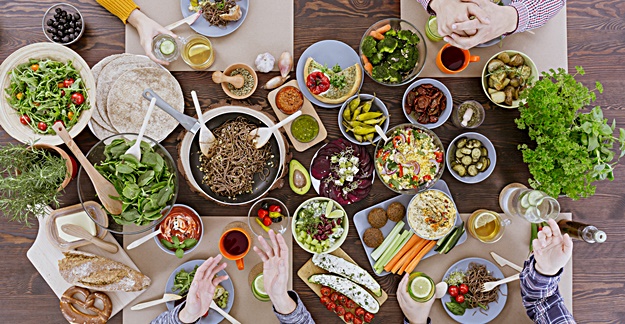 The solution to a lifetime of statins could lie in a diet based on vegetables, whole grains, beans and fruit.

The medical community recommends statins as a front-line (first-choice) treatment for high cholesterol levels that may also cut your chances of having a heart attack. Yet studies show that other cholesterol-lowering strategies, including dietary changes, reduce the risk of a cardiovascular event just as well as statins.

An additional benefit of eating better is avoiding the side effects of statins, which include an increased risk of developing diabetes and, in many people, muscle weakness and pain.

Detroit resident Phil Hogan says that concerns about potential side effects of statins prompted him to try a whole-foods, plant-based diet without meat or dairy.

“I was told I’d have to take them for the rest of my life,” says Hogan, who was given statins after a heart attack in 2013 that occurred within yards of a hospital after a charity cycling event. Soon after his heart attack, he also tore a rotator cuff. As his body healed, he found a Detroit-based holistic cardiologist, Joel Kahn, MD, to help him shift to a plant-based diet free of meat, dairy and eggs.

“The blood tests kept getting better and better,” he says. His LDL, aka “bad cholesterol,” registered at 109 at his last routine blood test (100-129 is considered “near optimal” by the National Heart, Lung, and Blood Institute). The 65-year-old stopped taking statins after 18 months on them, and remains committed to a whole-foods, plant-based diet and regular exercise.

The Long-Term Impact of Lowering Cholesterol

A review of numerous clinical trials published in JAMA last year shows that your heart attack or stroke risk declines as your cholesterol goes down whether you are using a statin medication or a dietary approach to lower cholesterol.

A healthy liver makes the right amount of LDL cholesterol for your body. All the excess cholesterol you get comes in through your diet, according to the American Heart Association. Saturated fat, meat, eggs and dairy are the only sources of cholesterol in the diet –- whole grains, vegetables, fruits and other plant-based foods do not add cholesterol.

The foods included in a plant-based diet can help lower cholesterol as effectively as statins, but without the side effects.

“It is possible to lower cholesterol to an ideal range with diet and exercise alone,” says preventive cardiologist Sharmin Basher, MD, an assistant professor of medicine in general and preventive cardiology at the Vanderbilt Heart and Vascular Institute in Nashville, Tenn. Dr. Basher says that people who have high cholesterol but have not had a heart attack should try exercise and diet before statins.

He prefers a Mediterranean-style diet built around whole grains and vegetables. If you find you can’t cut out animal products completely, the diet also emphasizes replacing butter with olive and canola oil, fish and poultry at least twice a week, choosing herbs and spices rather than salt, getting lots of exercise, and the occasional glass of red wine.

Let’s Talk About Diet – Or Not

The conversation about the importance of diet doesn’t always happen.

“No one ever told me [before it happened that] if I ate differently, I could change the outcome,” says geriatric social worker Betty Mizek, LCSW, who switched to a plant-based diet after a heart attack in 2015. At that time, her total cholesterol was 257, a level considered high. In keeping with national guidelines, she began taking 40mg of a statin daily as part of her recovery.

In January 2017, after nearly two years of a plant-based diet and statins, her total cholesterol plummeted to 115 and she was able to cut her statin dose in half, to 20 mg.

“At a population level, diet is important. Reduction in saturated fat is associated with lower LDL level,” says cardiologist Robert Rosenson, MD, professor of medicine and director of cardiometabolic disorders at the Icahn School of Medicine at Mount Sinai in New York.

When researchers tracked health data in 328 adults who were not on statins but were eating a whole-foods, plant-based diet, they found that the group lost an average of 50 pounds and also saw their LDL cholesterol drop by an average of 42.2 mg/dL – without any medication. The results appeared in the October 2015 issue of the American Journal of Lifestyle Medicine.

Dr. Rosenson points out that while statins both lower cholesterol and reduce inflammation that contributes to heart disease, they do not help you lose weight or prevent other chronic conditions, such as diabetes.

“It is certainly possible for people to eat away the benefits of a statin,” he says, explaining that if you take a statin but continue to eat poorly or to excess, you lose ground on health. “People who don’t modify their diet will gain weight and are likely to develop diabetes,” he points out.

“The strength of a plant-based diet is in a portfolio of foods that are effective in lowering the blood cholesterol comparably to statin therapy. If you add exercise, the effects can be even more pronounced,” says Hana Kahleova, MD, PhD, director of Clinical Research for the Physicians Committee for Responsible Medicine in Washington, DC.

The Cost of Statins vs. Diet

A copay for statins might range from a few dollars to $30 per month, depending on your health insurance and the medication prescribed. With every cost reduction in copays, more people are able to take their medications as prescribed, according to research in the January 2014 issue of the Journal of Managed Care Pharmacy.

People who stop taking their prescribed statins for financial or other reasons risk a subsequent heart attack, points out Dr. Rosenson. He argues that lowering LDL cholesterol through diet and medication not only reduces heart disease risk, it also reduces future healthcare costs.

The average out-of-pocket cost for an emergency heart attack hospitalization ring in at $1,586, according to a study of healthcare costs published in the September 2016 issue of JAMA Internal Medicine -– and that’s just one of the costs of care after a heart attack.

Meanwhile, people worrying about the cost of a healthier diet can relax –- research suggests that a healthier diet might actually cost less. “The costs are much lower for a plant-based diet compared to statin therapy,” emphasizes Dr. Kahleova.

Mizek says that she spends about $150 less a month in groceries for her household now that they have adopted a plant-based diet.

Trying to decide between diet and statins might not be necessary. Dr. Rosenson advocates for a combination of the two — but with your physician’s support, you could eventually find that a plant-based diet allows you to stop statins altogether.

Madeline Vann, MPH, is a freelance health journalist based in Williamsburg, VA. She has a Master of Public Health degree from Tulane University in New Orleans and over a decade of experience as a health and medical freelance writer. Her writing has appeared in HealthDay, Everydayhealth.com, the Huffington Post, Costco Connection, the New Orleans Times-Picayune, the Huntsville Times, and numerous internal and external corporate and academic publications.

Hi,
I need help. Am 53 years- Indian, diabetic(12 Years), hypertension(1 year) and now hyper cholesterolemia. I was prescribed along with diabetic tablets also tablets for BP and Cholesterol which is a combination of statin and ezetimibe.
I have now started on a plant based diet and a month later my levels of sugar, Bp and cholesterol were all with the normal range.
But my Doctor asked me to continue with the same set of prescription and no change in the dosage. Is it ok if I start taking statins every alternate day?