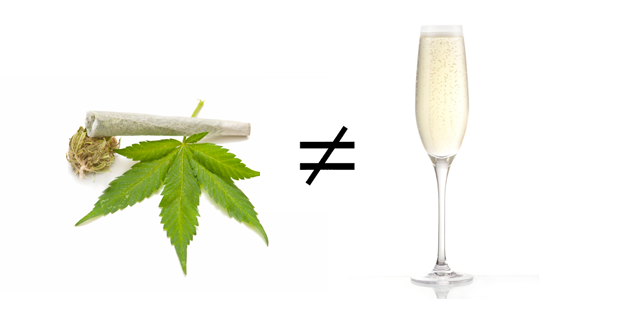 Recently I wondered out loud in this blog: Why can’t we use weed safely the same way we do alcohol? The law is clear and research-based on how much alcohol is too much to drive. The guidelines for how much one can drink before being considered intoxicated (legally) are well known and fairly consistent given sex, weight and frequency of use.

But we have no such guidelines for marijuana use. With legalization of recreational weed rolling from state to state (marijuana use more than doubled from 2001 to 2013), are we setting up a lot of generally law-abiding citizens to become DUI arrestees?

I attended a conference where Kari Franson, Pharm.D., Ph.D., spoke about why weed cannot be measured and managed like alcohol.

Weed can be smoked or ingested — oral use. If oral use, as in brownies or gummy bears (who dares to say weed is targeted to kids?) or other food disguises, the inter-patient (two or more different people) variability is up to 10-fold. To better understand that last sentence, Dr Franson explained if aspirin had a 10-fold variability (which it does not) then two people experiencing the same amount of headache pain one might need as little as one aspirin and another person might need 10 aspirins to feel the same relief.

Complicating the issue further, intra-patient (within the same person) variability is 4-fold. That means the same patient might need one ounce of weed 1 day and 4 ounces another to get the same high or the same pain relief, whatever the goal.

One last caveat – intra-patient response peak (how long it takes the body to feel the full effects of the drug) can vary from 1 to 5 hours within the same person with the same drug. Ouch! How in the world is a pot smoker or ingester supposed to know when to stop?

Colorado citizens are in a difficult situation. Weed is legal to use at home, but you can’t drive if there are more than 5 nanograms in your system. Many argue this is an arbitrary number. Limiting the ability to drive to longer than 5 hours after ingesting weed could make it very difficult for those who must use, such as medical marijuana users, and others. Inhaled weed’s response peak is also variable, but usually much quicker.

I asked this question in a phone interview with Dr. Larry Wolk, executive director of Colorado Department of Public Health and Environment. Dr. Wolk pointed out that there is very little research on cannabis in it’s many forms because it’s been illegal to use. Colorado has allocated $10 million to study the challenges to using weed responsibly and legally. But there are no answers yet.

I brought up Whoopi Goldberg, who has said several times on The View (I confess to being a fan of that TV show) that when people get high they don’t get violent and they don’t go out – they stay at home. “I hope that’s true,” Dr. Wolk responded. “But we’ve seen a number of accidents involving marijuana even before it was legalized.”

In other words, Coloradans, “Inhaler Beware.”