All in This Together: Why I Vaccinate My Kids 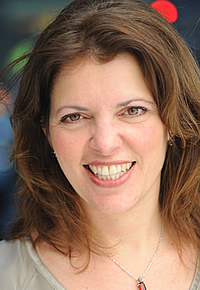 By Denise Schipani
Last week, when I took both my sons to the pediatrician for their annual check-ups,  (I double ‘em up, since their birthdays are close together), I was faced with a choice: Should my younger son, 10, get his TDaP (Tetanus, Diptheria, Acellular Pertussis) booster? The only reason our pediatrician recommended it that day was so we wouldn’t have to come back in less than a year when my younger son is ready to enter 6th grade, when this booster is required. He got the shot, as he and his 12-year-old brother have gotten all their immunizations.

Later, looking over the printouts of my children’s vital stats and vaccine schedules, I ran my finger over the shots and the dates, reaching back to my older boy’s infancy in 2002 to today, and recalling those very early weeks and months of their lives, when vaccines happened nearly every time we crossed the pediatrician’s threshold. I laughed with my little guy, pointing out to him the date on which he got a quartet of shots, and remembering his delicious chubby arms and thighs and his angry tears when given those four jabs (he got over it before we reached the waiting room, FYI).

I particularly noted the dates they’d gotten their MMR (measles, mumps, rubella) vaccines, since that vaccine has been in and out of the news for years, ever since the now roundly and thoroughly discredited “study” emerged that linked the MMR vaccine with autism. And because now, the measles itself is front-page news. We have all heard about the recent and troubling outbreak that began at Disneyland, of all places, and has, to date, infected an estimated 102 people in 14 states, according to the most recent CDC update (a 2014 outbreak caused a huge spike, with 644 cases in 24 states).

But too many parents these days seem to believe that is a small deal. Or at least, that diseases such as measles (or whooping cough, which has spiked in recent years, too; or chicken pox) are really much ado about nothing. Measles, for the record, is not nothing

This outbreak is particularly worrisome to me. While medicine has yet to settle every question, there are some things that are simply known, such as the fact that vaccines have been, in the words of more than one expert I’ve interviewed in the course of my career as a health writer, one of the greatest public health victories in human history. The vaccine for polio – which aroused  widespread fear and panic as it caused partial to full paralysis in so many — was so heralded that parents lined up for blocks to get a dose for their child. Vaccines have also kept measles, whooping cough, chicken pox and mumps in the shadows. Take just measles; in 1962, the year before the measles vaccine was licensed (MMR, the combined shot, came out in 1971), 4 million people were diagnosed with measles, 48,000 were admitted to hospitals and 3,000 people died. By 2000, the disease was declared eliminated in this country. This is no small deal.

Measles Is Not a Small Deal

But too many parents these days seem to believe that is a small deal. Or at least, that diseases such as measles (or whooping cough, which has spiked in recent years, too; or chicken pox) are really much ado about nothing. Measles, for the record, is not nothing: while many do easily get over the high fever and the rash, some sufferers end up with complications like ear infections, bronchitis, and pneumonia. Rare complications include encephalitis, which may lead to permanent brain damage. One or two in a thousand die from the illness. And measles is highly contagious, as the Disneyland outbreak demonstrates. If one person has it, 90% of the people close to that person who are not immune will also become infected.

So what sparked this reluctance or refusal to vaccinate? The autism story, no matter how often it’s discredited, sticks in the mind of many well-meaning moms and dads. Rumors of conspiracy abound (Who can trust pharma companies?), and a particularly American form of libertarianism exists (Why do what Big Government tells us?). Parents born well after dreaded diseases were relegated to history books, without a direct link to or memory of the untold lives those diseases took, might wonder why citizens should submit their children to shots. Others, with a world’s worth of information at their fingertips, are satisfied to trust their own research over their family doctor’s advice or a bureaucracy’s decree, asserting the premise that You can’t tell me what to do with my own child.

It’s Not Just Your Child

Except, it’s not just your own child that is affected by this vaccine debate. A certain attitude — that I will do what I feel is right for my child, in all instances — is growing, overshadowing the great, uncelebrated accomplishments of medicine and the unspoken truth that we are all in this together. In a very actionable way, vaccines are a deal we make when we live in a society. These days, I’m seeing evidence that the deal — that parents will comply with vaccine schedules (with some health exceptions, of course) in order not just to protect their own children, but to add to the public good, to boost the public health, to provide herd immunity and protect those more vulnerable — is fraying at its edges, with troubling results. The world is getting smaller,  and diseases that once couldn’t regain the tiniest toehold (I imagine an errant measles cell looking to latch on to a victim in Disneyland 15 years ago, and dying disappointed) now have firm footholds in communities where herd immunity dips below the estimated 90% to 95% needed to protect the majority.

When it comes to public health issues, it’s not just your child but everyone’s children who count. You have enormous freedom in how you raise your child, whether it’s regarding the food he eats, the bed he sleeps in, the activities he pursues or the religion he practices. But public health is about the community at large. When a child who isn’t vaccinated infects a baby who is too young to be vaccinated, whose public health rights prevail?

As I reviewed my boys’ immunization charts, I remembered something I’d nearly completely forgotten. When my older son was 15 or 16 months old, he said his first word: “star.” Why that word, I’ll never know but you can bet I ran out and got him a book about stars and a fuzzy, star-shaped rug for his room. That was the last word he’d say until he was well past the age of 3, after 2-plus years of speech therapy and a special-ed preschool. Today he remains, if only mildly, on the autism spectrum. That star rug is long gone but he is still our star, a bright yet quirky tween with an ironic sense of humor and a proficiency in math that as a writer astounds me.

Do I believe the MMR shot he got around that “star” time had any effect on my boy? I do, in fact. I believe it’s kept him safe from measles and mumps and rubella. Though I made the choice for him, being fully immunized is his first, important act as a citizen of the world. I wouldn’t change a thing.

The Link Between Vitamins, Supplements and Autism, Explained