High blood pressure is often called a “silent killer,” because, unless you’re having your blood pressure measured regularly, you probably won’t know you have it. It is critical to make sure you don’t have high blood pressure, because it raises your risk for heart attack and stroke.

Nearly half of all US adults have high blood pressure To counter this  trend, health professionals often advise us to eat healthier and exercise more frequently. Sometimes, though, high blood pressure has little to do with our habits and more to do with the prescription pad. Changes in blood pressure—both higher and lower—can be a side effect of extremely common medications like Advil and Motrin (ibuprofen) and antidepressants.

Many drugs alter blood pressure, whether or not they’re designed to do so. One class of drugs that raise blood pressure is ACE (angiotensin-converting enzyme) inhibitors. Here are some of the other most common culprits. 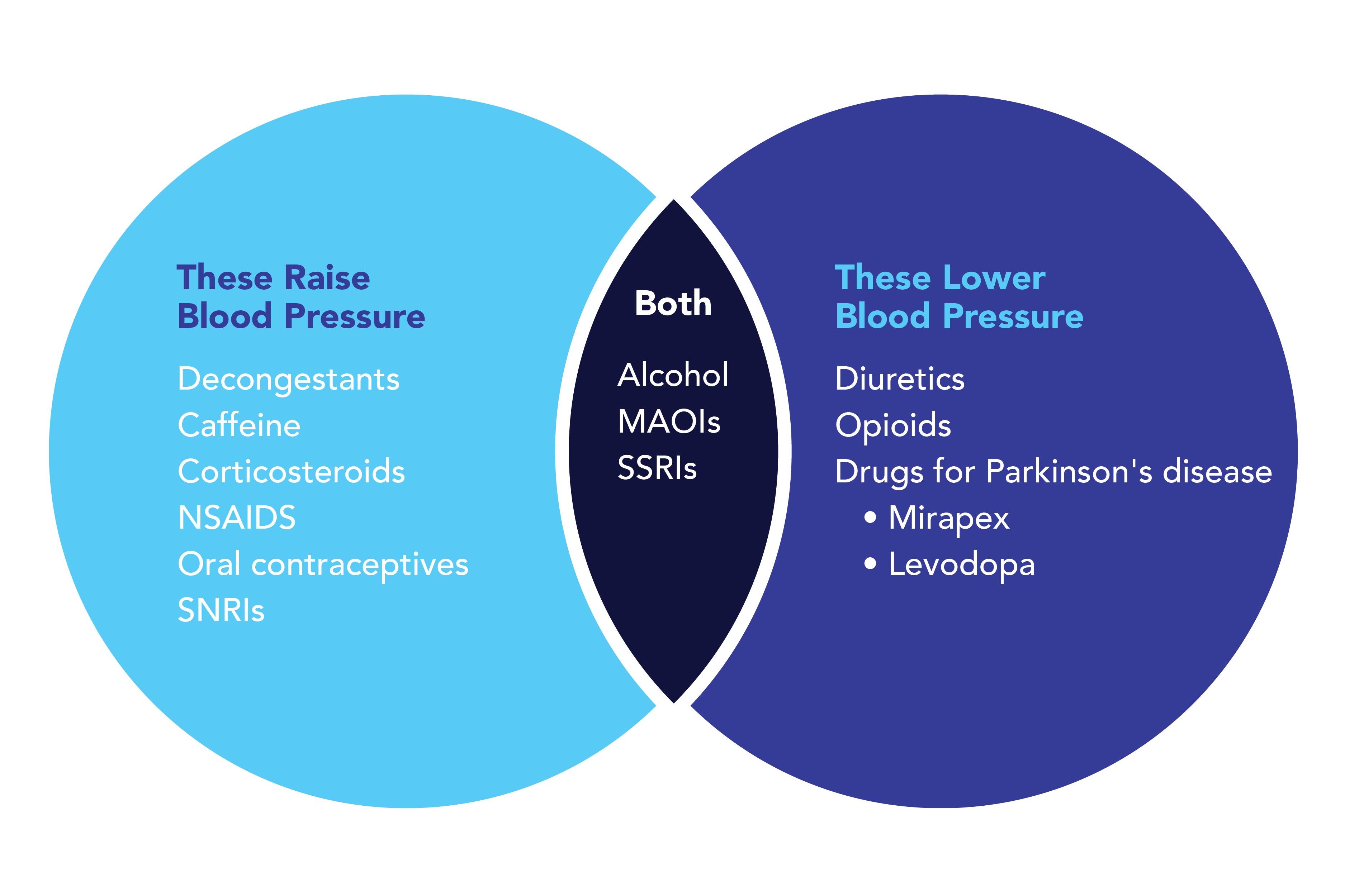 These Can Raise Blood Pressure

These Can Lower Blood Pressure

Drugs for Parkinson’s disease, such as Mirapex (pramipexole) or those containing L-Dopa (levodopa)

These Can Either Raise or Lower Blood Pressure

Depression increases the risk for cardiovascular disease. The neurotransmitters in our brain that fuel our energy levels, moods and motivation have roles all over our bodies. They circulate throughout our bodies and can interact with our blood vessels and organs. While it’s not a frequent side effect, many of these drugs can also mess with your blood pressure in either direction.

The SNRI venlafaxine is one of the most likely to lead to dangerous spikes in blood pressure and should not be prescribed for those at high risk. While most SSNRIs are tied to increased blood pressure, one drug in this category, Edronax (reboxetine), has been linked to both heightened and reduced blood pressure.

Caffeine is a known stimulant that can raise your blood pressure for about three to four hours after you consume it.

Corticosteroids, such as Delticot (prednisone), are often prescribed for inflammatory diseases like rheumatoid arthritis. They bring about myriad side effects, including an increase in fluid retention, which can raise blood pressure.

Decongestants like Afrin (oxymetazoline) or Sudafed (phenylephrine) work by constricting your blood vessels to reduce swelling that causes congestion. At the same time, narrower blood vessels carrying the same amount of blood will increase blood pressure.

For patients with Parkinson’s disease, low blood pressure, especially when going from sitting to standing, can be both a symptom of the disease or a side effect of such treatments as Inbrijia (levodopa).

Because changes in blood pressure aren’t always as easy to notice as more common side effects like nausea, it’s crucial to keep a close watch and regularly monitor your blood pressure, especially if you’re at risk. “There are many medications, both prescription and over-the-counter, that can cause either high or low blood pressure,” says Kelly Johnson-Arbor, MD, co-medical director of the National Capital Poison Center. She emphasizes that many drugs, supplements and conditions can alter your blood pressure when they interact with each other. After taking medication,  it’s crucial to contact your physician if you notice any symptoms. She adds: “You can always contact poison control by clicking on www.poison.org or by calling 1-800-222-1222, if you notice unwanted or strange symptoms after taking medications or supplements.”