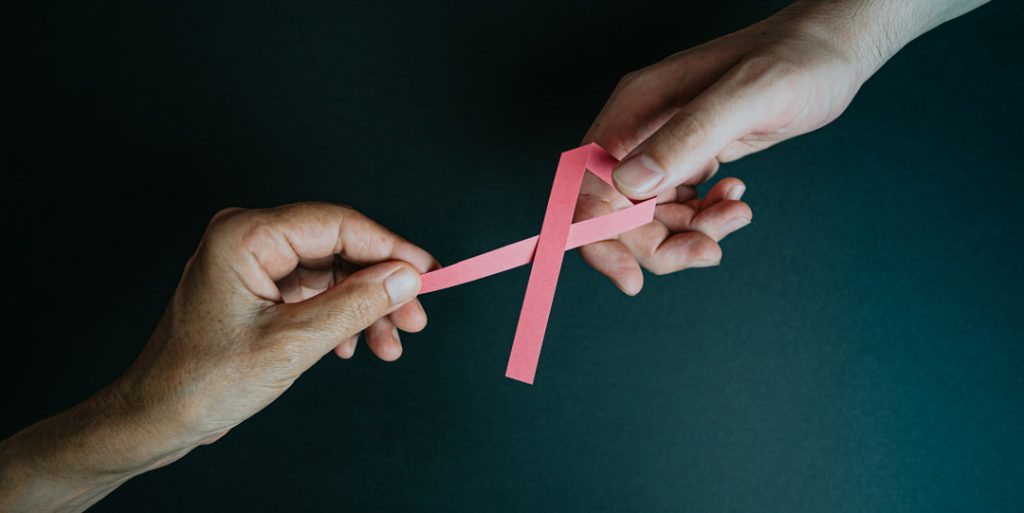 It’s almost unbelievable how much my life has changed in the seven years since my husband, Steve, and I were diagnosed with cancer.

Thankfully, Steve and I are both cancer-free today. And I found a new vocation and a mission in life. I mentor those diagnosed with cancer on how to deal with it by altering their eating, drinking, meditation and breathing habits and encouraging them to advocate for their health with doctors and other health-care professionals.

In 2013, both my husband, Steve, and I were diagnosed with different types of cancer. Steve’s was Stage 4 metastatic squamous cell cancer and mine was Stage 1 ductile invasive, estrogen-receptor positive breast cancer.

As breast cancer goes, this diagnosis is the one you would want, because its recovery rate is the highest. Due to my experience tending to family members and friends with cancer, I determined very quickly to reject most of Western medicine’s standard protocol for breast cancer and find my own path to health. Steve followed most of the protocol for metastatic squamous cell cancer and then joined me on my holistic path. I spelled out my first steps to wellness in my MedShadow article “Can Her Body Heal Breast Cancer” six years ago.

Neither my husband nor I have taken a single prescription or over-the-counter (OTC) drug in six and a half years. I did have surgery to remove the cancerous tumor, but then diverged from the doctors’ recommendations and carved out my own recovery plan. For follow-up on the site where the original tumor developed, I have used only ultrasound and thermography, because these modalities don’t involve radiation or physical pressure.

It wasn’t easy, and I had lots of doubts and emotions — fear, anger, sadness — along the way. At first, I was perturbed. I felt my body had betrayed me. I thought that because I “looked” healthy, wasn’t overweight or overtly “sick” and ate what I thought was a healthy diet, that I wasn’t a candidate for cancer. Of course, part of the journey was learning how wrong I was on all counts. To burn off my pent-up aggression, I would sometimes go upstairs to our guest bedroom and beat the daylights out of the mattress. That helped.

I was motivated to take a different path because we had many family members and friends who died from cancer after following a traditional and painful path of treatment. I started out doing serious research, a skill I had developed in 25 years as a qualitative researcher. What I discovered is that the majority of cancer cases are more likely related to lifestyle choices than to heredity. As I spent literally thousands of hours reading and analyzing, it became crystal clear that I had made many of those incorrect choices, but nobody ever told me what I was doing induced and assisted the cancer my body eventually produced.

I researched the body, how cancer grows and alternative methods of treating cancer. I feel strongly that the most important thing I did was refuse platinum-based chemotherapy drugs, radiation and hormone-suppression drugs. I believe that avoiding the side effects of those treatments was the key to achieving the vibrant health I enjoy today.

I revamped my diet

The first thing I did was buy a Kangen machine, which is Japanese-designed medical equipment that splits positive from negative ions in water, thus electrolyzing it. Daily, I drank 9.5 pH alkaline water, or half my body weight in ounces, about nine cups. In my own research, I came to the conclusion that cancer cells are missing a molecule that is a critical apoptosis (programmed cell death) and that water can “lend” this molecule to the cancer cells, thus helping them return to a normal state, where cells don’t mutate into cancer cells (non-mutagenic).

I also adopted a raw vegan diet of organic food only and gave up sugar, alcohol and soy, because soy has been shown to metabolize in the body as if it were estrogen feeding the tumor. Behind these three eliminations was the idea to starve the cancer (prior to surgery to remove the tumor) and processed foods that contain so many dangerous chemicals that contributed to my immune dysfunction.

I modified my exercise routine

Admittedly, I wasn’t doing a lot of exercise during the first few months after the surgery, since it was botched, and I had two seromas (big, painful pockets of fluid at the incision sites). These seromas had to be drained with long, large needles three times, which resulted in nerve damage that was extremely painful. Thus, my former regimen of weight-lifting and dancing Zumba was too painful to continue. Plus, at this time, I was extremely busy driving my husband to and from radiation every day for seven straight weeks, while trying to keep my consultancy business nominally functional and spending six to eight hours a day researching cancer causes, care and treatment on the internet. Eventually, many months after the surgery, I was able to get back to a workout routine.

Next, I started on a specific regimen of vitamins, supplements and even some off-patent drugs, thought to create an environment inhospitable to cancer in the body. This included working to alkalize the body, since cancer cannot survive in such an environment. It needs an acidic environment to use sugar for fuel. I worked to achieve an optimal immune function by boosting antioxidants, reducing the natural presence of [the steroid hormone] cortisol, so that my body would make fewer free radicals and clear out my blood vessels to render them “slippery” so that cancer cells couldn’t attach themselves easily.

I tapped into deep breathing, prayer and Chinese medicine

Multiple times each day, I practiced deep-breathing exercises along with positive affirmations. Cancer thrives in an anaerobic (low-oxygen) environment and cannot easily sustain itself in a highly oxygenated one. So my idea was to flood the body with as much oxygen as possible.  This is why many cancer patients benefit from hyperbaric chamber treatment (as did my husband, Steve).

Prayer was a huge part of my response to cancer. While I wasn’t actively practicing my Christian faith, I had found great comfort in it while caring for my mother during her 12 years of dealing with cancer. So when Steve and I got the diagnoses, praying was my natural fall-back response.

I was referred to a classically trained Chinese medicine doctor who practices acupuncture, herbalism, cupping and moxibustion. It was her treatment, I believe, that was key to rebuilding my immune system, my recovery from nerve damage caused by the surgery and to my overcoming many of the less-serious diseases and dysfunction I had suffered throughout my life.

My friends and family supported me

I was incredibly fortunate to have a loving, supportive husband, along with my brother, sister-in-law, two nieces and one of two stepsons, along with numerous close friends, chief among them, Suzanne Robotti [the founder of MedShadow]. Not all those folks were onboard initially with our decision to become modern medicine refuseniks, but even the dissenters now admit that the choices we made were right for us and have paid off handsomely with vibrant health beyond the lifespan the oncologists predicted for us. All of our chronic conditions have either cleared or dramatically abated.

Now I support other people’s journeys

When I began dealing with my own and my husband’s cancers, I never thought I would end up mentoring others. However, this new pursuit grew out of a conversation I had with a man in my community who also had had cancer. He asked me if I would give a lecture to its residents. At first, I was hesitant to do it because I couldn’t figure out how to boil it all down into a format that wouldn’t bore people to sleep or send them running for the exits.

Eventually, I relented and wrote a syllabus, which I then developed into the lecture series I now deliver at a minimum charge to small groups locally. I call it “The 5 Pillars of Enlightened Health,” which are spiritual and emotional; bodily essentials (breath, water, food, movement and sleep); external factors (toxins and detoxifying); alternative health modalities; and accountability.

I’m proud to say that nearly 100 people have participated. Some of them later update me on how my lecture series has changed their lives. While I know most of them will never fully embrace all of what has worked so well for me, I figure if they even change one thing, it might be the difference between struggling with their health and truly enjoying it.

When I do hear from them or when they refer others to me, I know I have fulfilled my mission.