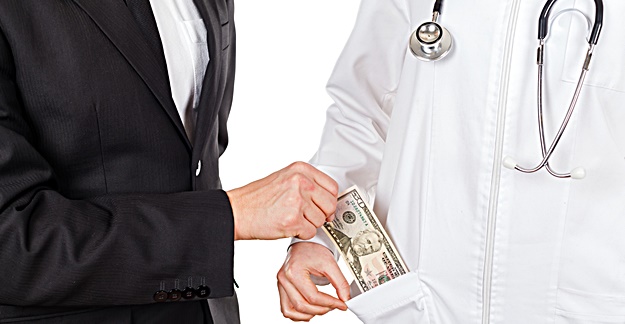 Am I being scurrilous? No. Allergan, the maker of Restasis, just agreed to settle kickback allegations by paying $13 million to the federal government and 19 states. The lawsuit alleged that the primary purpose for the “Allergan Access” program, promoted to ophthalmologists, was “to induce doctors to write prescriptions for Allergan’s eye care products, many of which had less expensive treatment alternatives.”

This makes me angry. Doctors run a business and they have the right to grow their business and maximize their profits, but not by violating the principles under which they are licensed and sworn to. Doctors hold the trust of their patients, and the welfare of their patients is their first responsibility — before their paycheck. If a doctor is willing to recommend people use products that are not necessarily the best option for the patient, he or she is no longer acting as a doctor but has turned into a salesperson motivated by profit.

This isn’t to say that no one needs Restasis or similar products. There are those with severe dry eye for whom the drug is effective. However, the marketing push was to encourage doctors to prescribe Restasis in order to increase their profit, not because it was the best choice for that patient.

If a doctor is willing to recommend people use products that are not necessarily the best option for the patient, he or she is no longer acting as a doctor but has turned into a salesperson motivated by profit.

The lawsuit was brought by two Philadelphia ophthalmologists, who, according to FiercePharma’s reporting of the lawsuit, “attended an Allergan ‘Dry Eye Dinner’ in 2009, where a senior business advisor for the company told 16 to 20 eye care professionals that aggressively treating dry eye patients would result in significant increases in annual revenues for their practices. Further, the company encouraged doctors to market their practices as a ‘Dry Eye Center of Excellence’ with Allergan’s assistance, the complaint said.”

The idea that Allergan also offered payments for doctor attendance at meetings and dinners, according to the lawsuit, adds further doubts on the ethics of Allergan and the ophthalmologists who participated.

It’s unfair, but because of the actions of a few, we all need to take a closer look at our doctors to see if they are receiving payments from drug companies. A simple step is to go to the Dollars for Docs site by ProPublica, which is exceptionally easy to use. Or try Open Payments, which is run by CMS (Centers for Medicare and Medicaid Services) and is a much more robust site, offering searchable information on doctors, teaching hospitals, and much more, but is a little more complex.

If you see that your doctor is accepting money from a pharmaceutical company, that shouldn’t condemn the doctor, but it should start a simple — but potentially difficult — conversation with your doctor. After that talk, you might be perfectly comfortable continuing your relationship with your doctor. If not, then it’s time to find another provider.

The relationship between doctor and patient requires that the doctor has the patient’s best interests in mind at all times, and is marked by mutual trust between both parties. But as former President Ronald Reagan was famous for saying, “Trust, but verify.”