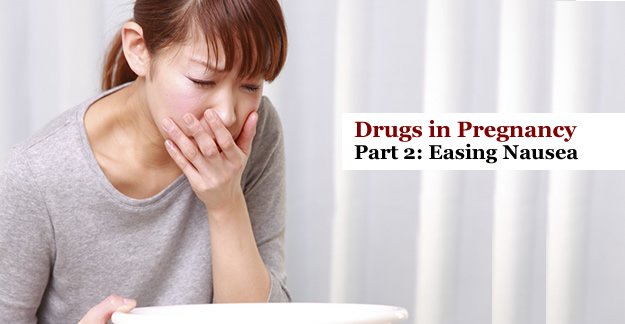 In this 2nd part of our 7-part Drugs in Pregnancy series, we tackle the issue of pregnancy nausea. Though the one major anti-nausea drug prescribed during the first trimester, Diclegis (see below), is considered safe, it’s always smart to understand both how drugs’ (prescription or OTC) effects are altered during pregnancy, and how to ease symptoms by other means. As of June 30, 2015, the FDA is changing how drugs are labeled in terms of how they affect pregnancy, childbirth, lactation, and male and female reproduction. Find out more here.

Nausea and vomiting during pregnancy, also known as NVP, affects 50 to 90% of pregnant women, and occurs during the first 10 weeks of pregnancy. Affectionately known as “morning sickness,” NVP can occur and last throughout the day, not just in the morning. The good news for the most common medical condition during pregnancy is that normal morning sickness isn’t harmful to the mother or the baby. (You may worry that your nausea means you’re not consuming enough calories. Ask your doctor if you’re worried about early-pregnancy weight loss, but in most cases it’s not a problem.)

It’s not known why some women feel nauseated and some don’t, though the cause is likely linked to rising hormone levels in early pregnancy, particularly human chorionic gonadotropin (HCG).

The majority of women who experience NVP start to feel better in their 2nd trimester, according to The March of Dimes. You should see your doctor if you experience nausea, vomiting, retching and similar symptoms for the first time after the initial 10 weeks, and if the severity increases, as these may be the sign of other, more serious health conditions, according to MothertoBaby.org, a non-profit dedicated to education and research of the teratogenic risks, including birth defects and malformations, associated with medication and other products taken during pregnancy. In this case, treating the underlying condition may resolve the associated nausea. Medications to manage nausea won’t relieve the symptoms entirely unless the underlying condition is treated. For example, you could be suffering from vertigo or a migraine, which often have nausea as a symptom.

Another possible but rare cause of severe pregnancy nausea is gestational trophoblastic disease (GTD), a group of tumors, usually non-cancer causing, that involve abnormal cell growth in a the uterus while pregnant. There are five main forms of GTDs, all of which can be treated, and most of which can be cured, according to the American Cancer Society.

Severe morning sickness itself, categorized as vomiting three to four times a day or the inability  to keep any food or liquid down, also called hyperemesis gravidarum, or HG, can cause dehydration and weight loss in the mother that could then affect the safety of the pregnancy, requiring hospitalization and intravenous fluids. 2 in 100 pregnant women may experience hyperemesis gravidarum. Severe morning sickness caused Kate Middleton (otherwise known as Catherine, the Duchess of Cambridge), to be hospitalized during her first pregnancy.

HG has also been associated with a bacterial infection known as Helicobacter pylori. Women with a history of severe NVP or HG during pregnancy should be tested for the bacterium, and treated for it.

There are other known causes of NVP, such as kidney infections, viral illness and food poisoning, says Lori Wolfe, a genetic counselor with MothertoBaby.org. If you vomit a lot in the second half of your pregnancy, she notes, this can be a sign of pre-eclampsia.

When it comes to nausea, an ounce of prevention may be as good a cure as any medication. If you’re like the majority of pregnant women, you’re probably on a prenatal vitamin. Taking it at night, along with a light snack, may be easier on your stomach than popping that pill in the morning, when your stomach is empty. The iron in prenatal vitamins is often hard to digest, so you can switch to a prenatal with a lower iron dose or none at all. Or you can go off your prenatal entirely if this causes you to be queasy, replacing it with just a folate/folic acid supplement — just check with your doctor first.

Before rising from bed, eat a few plain crackers to settle your stomach. Get up slowly to avoid triggering dizziness, which may in turn make you queasy. Eat smaller meals throughout the day instead of three larger meals, and keep them all light on fat, oils and spices, choosing blander foods like cereals, rice and bananas that are easier to digest. A good rule of thumb is to eat something small every 2 hours to keep your stomach from being empty and help you avoid feeling sick. You should also stay hydrated throughout the day, but take small sips of water instead of large gulps, which may upset your stomach.

If none of these tricks work, and you want to try a medication to relieve your NVP symptoms, Diclegis is recommended as a firstline treatment by the American College of Obstetricians and Gynecologists. It is a combination of doxylamine succinate (an antihistamine) and pyridoxine (vitamin B6) that has been shown to be a safe and effective treatment for NVP, with no evidence of harmful effects on the fetus. In fact, it’s the only medication approved by the FDA that’s been given a pregnancy rating of “A,” says Wolfe. (See our pregnancy drug safety information, here, and our blog post about Diclegis)

There are other meds that are sometimes prescribed for nausea in pregnancy, such as Phenergan (promethazine). “This has no known increased risks when used in the first trimester, but it could increase the risk of respiratory distress in the newborn if used closer to the end of pregnancy,” says Wolfe. Zofran (ondnestron) is also commonly used for NVP, though two different studies indicate a small increased risk for heart defects.

Natural supplement combinations of ginger and vitamin B6 (pyridoxine) are also commonly used for the treatment of NVP, according to the MothertoBaby Factsheet on NVP (pdf). Extensive research has shown that some women may benefit from vitamin B6. As for ginger supplements, up to 1000 mg/day of dried ginger root powder equivalent may be effective for treating NVP without increasing risks in pregnancy, found several small studies, such as one published in 2009 in the Journal of Alternative and Complementary Medicine.

As for plain ginger supplements, says Wolfe, data doesn’t show any risk. “As far as I know I can tell you yes, you can use it. But as with any herbal medication, you can’t always be sure of the exact composition of what you are buying, so be aware.” Whenever possible, Wolfe prefers getting supplements through food sources. Room-temperature ginger ale can settle a queasy stomach. Ginger can also be consumed in herbal teas and crackers or cookies. Other foods that often help quell nausea are watermelon, salty chips and pretzels, pickles and fruity popsicles. Some women find that keeping mints and minty gum on hand helps, too. So does getting plenty of fresh air, since stuffy, overheated, indoor air can trigger nausea.

The most important thing to remember about the most common type of morning sickness is that it subsides as your pregnancy progresses. Rest assured, you’ll be looking at food with a whole new interest when you pass that queasy stage.

Next up in our Drugs and Pregnancy series: Cough, Cold, Flu and Allergies