Are There Drugs in Your Supplements? 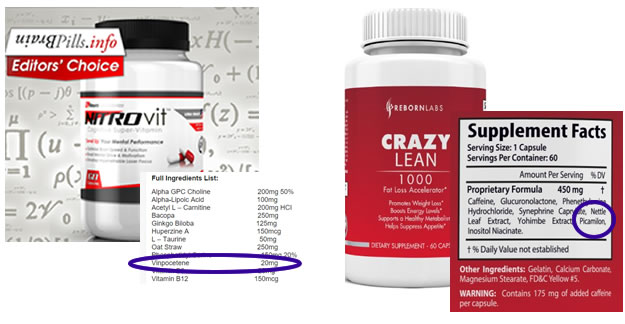 Overlooked and misunderstood, vinpocetine and picamilon are powerful drugs mistakenly allowed into more than 300 brands of supplements.

Research released on October 1, 2015, shows that the FDA made a mistake and has allowed 2 drugs to be added to more than 340 sports supplements, brain enhancers and weight-loss supplements available without a prescription.

The study measured the amount of both vinpocetine and picamilon in supplements sold over the counter and has been published in the journal Drug Testing and Analysis. While both of these drugs are similar to botanicals (which do not have to be proven safe for humans in the US), they are in fact drugs with very little proven benefit and very significant potential side effects. The first drug was proposed to the FDA as a non-drug supplement in 1999 and the FDA should have challenged it then. Instead, the FDA allowed their inclusion, apparently not recognizing vinpocetine is a synthesized drug, not a botanical. The second drug, picamilon, was never even presented to the FDA.

1. Vinpocetine is used for acute stroke and cognitive impairment in China, Russia and a few other countries but NOT in the US. Pieter A. Cohen, MD, the study’s senior author and one of the 3 authors of the website Updates in Slow Medicine, said he conducted a search of Cochrane Library information (Cochrane is a non-profit, non-government collaboration of medical professionals who organize medical research to facilitate decision-making) which suggested vinpocetine offered “no benefit and vinpocetine can lead to flushing, headaches, and decreased blood pressure.”

23 supplements that listed vinpocetine on their label were available online at either GNC and The Vitamin Shoppe. The study found that 6 of them had no vinpocetine in them, despite the label claim. The balance of them, if used as recommended, ranged from incidental amounts up to prescription strengths of 5 – 40 mgs. The top amount was 32 mgs in the supplements.

Several web sites claim vinpocetine to be an extract of the periwinkle plant (vinca minor), but the research study confirmed it is not related to the plant.

2. Picamilon (also known as nicotinoyl-GABA) was developed in Russia to cross the brain-blood barrier and mimic normal GABA activity in the brain — which could act as an antianxiety and anticonvulsant medicine by creating inhibitory central nervous system effects (calming the brain so that neurons fire less often). The nicotinoyl portion potentially leads to dilation of central nervous system blood vessels. It’s used in Russia to treat various neurological conditions.

The research is thin on picamilon; the kind of rigorous studies that the FDA requires have not been conducted. For a substance to be presented to the FDA as a new drug, “You would need to demonstrate efficacy in treating at least one condition,” stated Dr. Cohen, “and the data is just not strong enough that picamilon treats any condition effectively.”

Without in-depth testing the side effects aren’t clear. Dr. Cohen suggested that it would be expected that the inhibitory effects on the central nervous system could lead to drowsiness or sleepiness as do similar drugs in the same family. Using this drug with alcohol or while taking another drug that has sedating properties like benzodiazepines or antipsychotics could lead to over-sedation.

The study tested 31 picamilon supplements finding that the actual quantities  of the supplement ranged from very close to what was on the label to 157% of the label. One product had no picamilon in it. In Russia picamilon is prescribed medically in dosages from 50 mg to 200 mgs. If taken as directed on the supplement packaging the user would end up ingesting about 2.7 mgs to 721.5 mgs.

The FDA is taking action with dangerous and/or mislabeled supplements. According to The Economist:

On September 1st America’s Food and Drug Administration (FDA) sent warning letters to firms selling pure caffeine, one teaspoon of which has as much of the stuff as 28 cups of coffee. In April the FDA warned several firms that they had illegally dubbed as “supplements” products that contain BMPEA, a stimulant similar to amphetamine.

When the FDA moved against BMPEA, the action was based on research by a team that was also led by Dr. Cohen published earlier this year in Drug Testing and Analysis.

The labels of multi-ingredient supplements can be very difficult to read and interpret. The public needs the strong guidance of the FDA. Until supplements are reviewed as carefully as prescription drugs, buyer beware. Those using supplements should discuss all the products in their supplements with their health care provider and buy supplements from well-known, trustworthy companies (see “What’s In My Supplement?“).