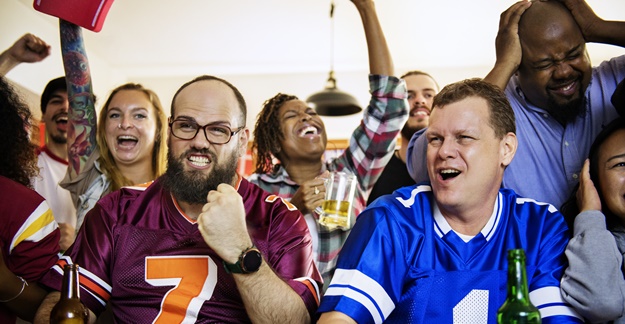 When you think of the Super Bowl, concerns about health usually don’t come to mind. But with hundreds of millions of people watching the big game from home and doing a considerable amount of eating and drinking during it, it’s important to keep in mind that overindulging can potentially lead to some health problems, albeit short-term ones. Here are some tips to enjoying the Patriots-Rams matchup this weekend without any health hazards.

Keep Bacteria Away From Your Food

In the US, Super Bowl Sunday is the second-largest food consumption day of the year. Chicken wings are synonymous with football games, and more than 1.25 billion of them were eaten over the 2014 Super Bowl weekend, according to the National Chicken Council. Whenever handling raw food, there is a risk of bacterial contamination. If you are cooking up your own wings – or any other food – be sure to wash your hands with soap and warm water for at least 20 seconds both before and after handling the food. Also, do not allow raw or uncooked food to come in contact with cooked foods, as this can lead to food poisoning . Use separate plates and utensils for raw and cooked foods.

If you are cooking wings, foodsafety.gov says the frying oil should be at 375 degrees F before putting in the wings, and they should be cooked to an internal temperature of 165 degrees. Also, make sure not to put too many wings in the fryer at one time, as doing so can lead to some being undercooked.

If you have an array of food items out, it’s important that hot foods have a heat source to keep them hot and cold ones are on ice. Perishable foods should be kept out for two hours max. After that, throw them out.

You’ve Got Heartburn and Indigestion

Chowing down during the game is as much a part of the Super Bowl as the halftime show and the commercials. But overindulging can lead to discomfort and even a stomach ache in your gut. To avoid this, try to pace yourself so you don’t overeat. Of course, this is easier said than done, so if you find yourself with heartburn or indigestion, you might head to your bathroom for some Tums, Mylanta or Nexium.

Tums and Mylanta are antacids and work to neutralize acids in your stomach. Nexium (esomeprazole) is known as a proton-pump inhibitor (PPI), and works by cutting down acid production in the stomach. You should know that routine use of PPIs has been linked to a higher risk of death compared to another class of acid reducers known as H2 blockers, such as Zantac (ranitidine). Long-term PPI use has also been linked to kidney damage and weakened bones.

If you’d like to get rid of heartburn without turning to medication, there are a few natural options. Baking soda mixed with water can help neutralize stomach acid. Eating a little bit of ginger may also help, though avoid drinking ginger ale as carbonated drinks can actually make the problem worse. Diluting a bit of apple cider vinegar in water might do the trick, and some people say that licorice root can also help.

Go Easy on the Alcohol

Drinking beer during the game is a popular pastime, reinforced by the slew of beer ads shown during commercial breaks. As the game lasts about three hours (or more, if there is overtime!), that’s a long time for drinking. Although you might be persuaded to drink throughout the game, don’t. Not only might it lead to a hangover the next day, all that alcohol can seriously tax your liver — and beer has a lot of calories anyway.

If you insist on drinking a lot, have a glass of water with or after each alcoholic beverage. That’s because alcohol is a diuretic and removes water from your blood through urine. This can lead to dehydration, which contributes to a hangover. Also, don’t drink on an empty stomach. Having some food in your stomach will slow the absorption of alcohol into your bloodstream – but it still can’t prevent you from getting drunk if you drink too much too quickly.

The Purple Pill Problem: PPIs and Serious Side Effects