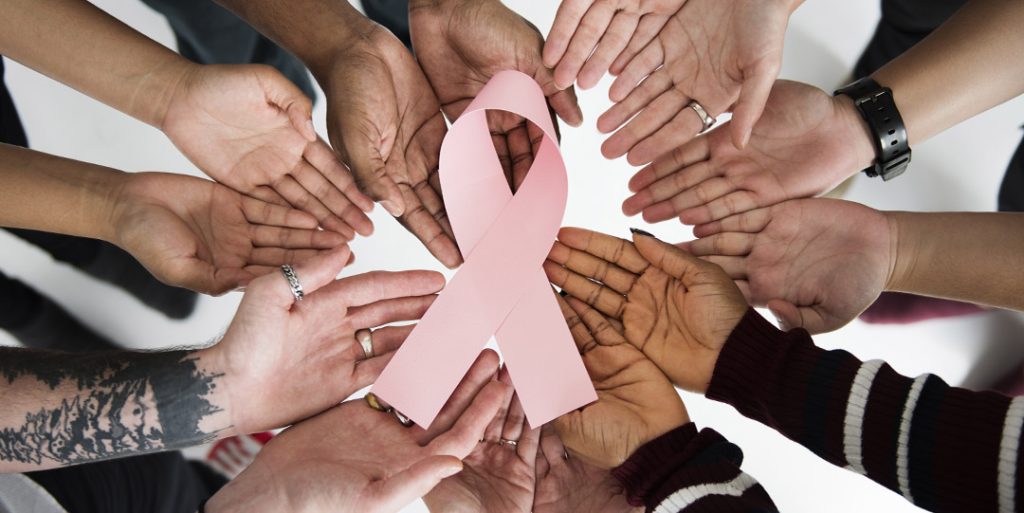 Breast cancer occurs when malignant tumors develop in the breast, often in the lobules (the milk-producing glands) or in the ducts (the passages that drain milk from the lobules to the nipple). As cancer cells reproduce, they can invade the lymph nodes and blood vessels near the original tumor and spread — or metastasize — to other parts of the body, damaging tissue and other organs.

Breast cancer occurs almost entirely in women, although men can get it too.

About 1 in 8 women in the US (13%) will develop invasive breast cancer during their lifetime. In 2020, about 276,480 new cases of breast cancer will be diagnosed in women.

Death rates from breast cancer have remained steady among women under 50 since 2007 and have been declining in older women. The drop is believed to be the result of earlier detection through screening and increased awareness as well as improved treatment.

Top Risk Factors That You Can Change:

Breast cancer discovered in an early stage — where it is still localized and hasn’t spread to other parts of the breast tissue, lymph nodes or body — is much easier to treat, and survival rates for women are much higher.

There are several ways to discover the presence of breast cancer, including:

Mammograms can be beneficial but they can also present harms, including false negative or false positive results. A false negative result means that the mammogram missed a cancer, which may delay finding the cancer and getting treatment. False positives occur when the X-ray shows something that looks like cancer but is not. False positives can lead to more tests, which can be expensive, invasive, and may cause psychological distress, anxiety and uncertainty. A mammogram, biopsy and other tests cannot tell the difference between a cancer that would not have gone on to cause symptoms or problems, or even may go away on its own versus a more aggressive cancer. For that reason mammogram screening can lead to overdiagnosis and overtreatment. / Overtreatment can include surgery, radiation therapy and other breast cancer treatments.

The US Preventive Services Task Force, the American Cancer Society and other health organizations have different screening recommendations for mammograms. Consult with your doctor about when and how often you should be screened.

Researchers are working toward individualized approaches to breast cancer screening as a goal of precision medicine. Doctors would identify people at risk of breast cancer and determine tests and testing intervals depending on each person’s risk level. People who are not at risk would avoid screening hazards, such as false negatives, false positives and overdiagnosis. A study called WISDOM (Women Informed to Screen Depending on Measures of Risk) is underway to compare an individualized approach known as risk-based screening to annual mammograms. The study aims to recruit 100,000 women who will be assigned to receive annual mammograms or screening based on their individual risks, such as genetic markers for breast cancer or family history of breast cancer.

If a woman is found to have breast cancer, several treatment options are available. Her medical team will consider the type and stage of the cancer, and whether or not it has spread; her age, health and menstrual or menopausal stage; and whether or not this is her first cancer treatment. If a woman has a lesion determined to have a very high likelihood of being benign,  a “watchful waiting” approach with a careful follow-up may be appropriate. Others will explore one or more of several other options.

Many women with breast cancer have some type of surgery, combined with radiation or chemotherapy. Common surgeries include:

Side effects: Pain, temporary swelling, tenderness and hard scar tissue that forms at the surgical site. Limited arm or shoulder movement, numbness in the upper arm or chest, and post-mastectomy pain syndrome, nerve pain in the chest wall, armpit, and/or arm that doesn’t go away over time, may also occur. Bleeding and infection at the site of surgery are also possible.

There are a number of different situations in which chemotherapy could be used to treat breast cancer. After a person has surgery to remove a tumor in early breast cancer, chemotherapy may be used to destroy any undetected cancer cells to reduce the risk of recurrence and help prevent the cancer from spreading to other parts of the body. This additional treatment is known as adjuvant therapy.

Chemotherapy may also be used before surgery in early breast cancer to shrink the tumor. This may give the surgeon a better chance of removing the entire tumor, and not needing to remove the entire breast. It may help reduce the chance that the cancer will return and limit the cancer’s involvement in lymph nodes. When chemotherapy is used before surgery for cancer it is referred to as neoadjuvant therapy.

Sometimes hormonal therapy is used to help reduce the risk of breast cancer development in high-risk women. This use of chemotherapy is referred to as chemoprevention. When breast cancer has advanced to other parts of your body, surgery may not be an option. In this case chemotherapy may be used alone or it may be combined with targeted therapy. In advanced breast cancer, chemotherapy aims to improve quality of life rather than cure the disease.

Chemotherapy Side effects: Chemotherapy kills fast-growing cancer cells but can also harm normal cells that divide rapidly. It can lead to a reduction in red blood cells (causing a greater susceptibility to infection, bruising, bleeding, fatigue); changes in the lining of the intestinal tract (poor appetite, nausea and vomiting, diarrhea); changes in the cells that produce hair (hair loss); and tingling or numbness in the hands or feet. (See MedShadow’s How to Deal with Chemo Side Effects)

Radiation therapy, or radiotherapy, uses high-energy rays, usually X-rays, to destroy or damage cancer cells. Unlike chemotherapy, it affects cells only in the part of the body that is treated with the radiation. Radiation therapy may be used to destroy any remaining mutated cells that remain in the breast or armpit area after surgery and reduce the risk of recurrence.

Side effects: Skin irritation of the targeted area; red, dry, tender, itchy or blistering skin; breast swelling and heaviness; discoloration, redness or bruised appearance; fatigue; weakness or fracture of ribs. Radiation therapy can cause inflamed lung tissue, or damage the heart arteries and cause coronary artery disease or blockages.

Hormone therapy is a type of adjuvant treatment that uses hormone blockers, such as tamoxifen and aromatase inhibitors (anastrozole, exemestane, letrozole) to help destroy cancer cells by cutting off their supply of hormones, such as estrogen or progesterone. Some breast cancer cells have receptors that feed on these hormones, stimulating their growth.   Tamoxifen and aromatase inhibitors (used in postmenopausal women) are taken orally, often to reduce the risk of breast cancer in high-risk women or to prevent the recurrence of cancer after surgery. According to recommendations from the US Preventive Services Task Force (USPSTF), women at low breast cancer risk should not be given these medications for breast cancer prevention due to adverse events. Hormone therapy is given for at least five years and can reduce the recurrence of certain (hormone-dependent) breast cancers by 50%.

Bisphosphonate therapy is another type of adjuvant treatment that may help reduce breast cancer recurrence, prevent it from spreading to bones, or improve survival in postmenopausal women.

See Can a Pill Prevent Breast Cancer? For Some Women the Answer May Be Yes

These are newer treatments that attack specific breast cancer cells while avoiding harm to normal cells. Targeted methods are often used in combination with other targeted drugs or with traditional chemotherapy. Targeted treatments may be given orally, intravenously or by subcutaneous injection.

Targeted therapies for breast cancer include herceptin (trastuzumab), Perjeta (pertuzumab), Tykerb (lapatinib), Tukysa (tucatinib) and Nerlynx (neratinib). These drugs target  HER2 (human epidermal growth factor receptor 2), a growth-promoting protein on the outside of breast cells. Phesgo is a mixture of trastuzumab, pertuzumab, and hyaluronidase-zzxf, an enzyme that helps the body absorb the other two drugs, combined in a single subcutaneous injection for HER2-positive breast cancer.

Ibrance (palbociclib), Kisqali (ribociclib) and Verzenio (abemaciclib) are targeted treatments known as cyclin-dependent kinase inhibitors. They are used in combination with hormone therapies to treat advanced HER2-negative, hormone receptor positive (meaning they have receptors that estrogen or progesterone can attach to, fueling tumor growth). Blocking cyclin-dependent kinase helps prevent cancer cells from dividing. These drugs may be used after hormone therapy has failed. The National Cancer Institute has more information on targeted therapy drugs.

Herceptin, Perjeta and Phesgo are examples of immunotherapy medications, which are targeted therapies that stimulate a person’s immune system to help recognize and destroy cancer cells. Tecentriq (atezolizumab) is an immunotherapy agent known as an immune checkpoint inhibitor. Tecentriq is used in combination with the chemotherapy drug paclitaxel in certain types of advanced breast cancer.

Studies are underway to determine whether watchful waiting, also known as active surveillance, is as good as surgery for cancer-free survival in women with DCIS and other low-risk lesions. DCIS is an early, noninvasive breast cancer that has developed in cells lining the ducts but has not spread through the duct walls into nearby tissue. There is evidence that low-risk DCIS grows so slowly that it would never cause problems during a woman’s lifetime.

This is where watchful waiting comes in as a potential means of safely avoiding surgery. Under a watchful-waiting protocol a woman will be closely monitored, undergoing breast exams, mammograms or other imaging studies regularly, and may also take hormone therapy or other medications to suppress cancer growth. Talk to your doctor about whether watchful waiting is right for you.

Before beginning any course of treatment, tell your doctor about any prescription or non-prescription drugs you are taking — as well as any vitamins and herbal or dietary supplements. Drugs and supplements may interfere with the effectiveness of the breast cancer treatment and/or make side effects worse. Studies show that up to 41% of cancer patients experience potentially harmful interactions between drugs they currently take and cancer therapies. Cancer patients at greater risk of problems from drug interactions include those with many chronic illnesses who take multiple drugs, such as antihypertensives, warfarin and anticonvulsants.