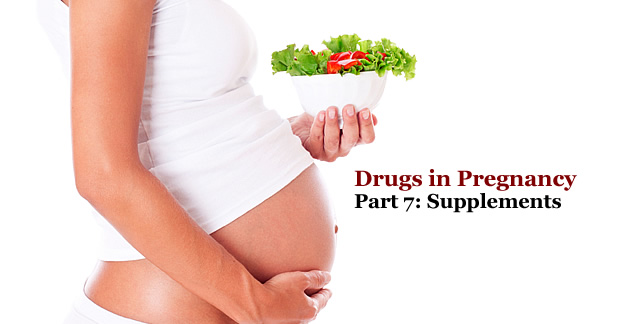 In Part 7 of our Drugs in Pregnancy series, we’re talking about supplements. You know you need vitamins and minerals (your healthcare provider likely prescribed prenatal vitamin for you). But are other supplements — even ones that seem benign — always a smart swallow when you have a growing baby to consider? It’s a sticky subject, for sure.

Unlike medications, the FDA does not test and monitor the safety or efficacy of supplements. Vitamins and minerals do, however, have at least both an established recommended daily allowance (RDA) and a daily safety limit set by the U.S. Department of Agriculture.

Drugs in Pregnancy: A 7-Part Series Every Pregnant Woman Must Read

And see our Classification of Prescriptions Medicines During Pregnancy.

The FDA also doesn’t oversee the manufacture of supplements, so there’s no way for a consumer to be certain of what they are purchasing and ingesting. 4 large national retailers were recently found to have sold supplements that did not contain any ingredient as labeled, with some containing ingredients that could cause an allergic reaction.

For most supplements, there’s even less data available when it comes to how they affect pregnancy and lactation. “There’s such a large variation of the composition of what you’re buying, and you can’t be sure of what you are buying that we can’t tell you whether it’s going to be effective or even safe in that sense,” says Lori Wolfe, a certified genetic counselor who advises women about the risks of medication use in pregnancy and while breastfeeding. (Wolfe is also the president of of MotherToBaby, a free, national informational service of the non-profit Organization of Teratology Information Specialists).

Pregnant women are often told to take prenatal vitamins. Most prenatal vitamins contain folate/folic acid, iron, calcium, Vitamin C, zinc, copper, Vitamin B-6, and Vitamin D. Of these, only folate/folic acid, which has been shown to prevent miscarriage and neural tube defects, such as spina bifida and other defects of the brain and spinal cord, is considered necessary and recommended for women of childbearing age, by the World Health Organization, the Institute of Medicine, and the ACOG. The US Recommended Daily Allowance (RDA) for folate during pregnancy is 600 μg/day, or 0.6 mg/day. While most women don’t get enough folic acid in their daily diet, birth defects can only be prevented during the first trimester when a woman might not realize she is pregnant. For this reason, women trying to conceive may want to take a folic acid supplement or eat foods high in folate such as spinach and other dark, leafy greens; cooked lentils; breads and cereals fortified with folic acid; cantaloupe; and eggs.

If you do take a prenatal vitamin, stay below the RDA for each vitamin and don’t combine a prenatal vitamin with other vitamins, minerals or multivitamins to avoid potentially toxic doses. To avoid feeling nauseous, the most common side effect of not just prenatal vitamins, but multivitamins in general, take them with food and before bedtime, rather than on an empty stomach first thing in the morning. Ginger ale and tea made with real ginger can also alleviate nausea.

As always, it’s best to get the nutrients your body and your baby needs through a healthy diet of lean protein, whole grains, and fresh fruits and vegetables. Talk to your doctor before taking any herbal medication or supplement, as some may also interact with other medications you may be taking.

The medical community was shocked at the conclusions of two new studies on fluoride’s effect on fetuses exposed to flouride in utero.

A very large and well-conducted study comparing the IQ of 3 to 4-year old children whose mothers had or had not been exposed to fluoride before giving birth. Of those exposed to fluoride in utero, boys’ IQs were about 5% lower than the comparison group who had no or little exposure. This is a significant amount, it is on a scale similar to the damage that direct lead exposure in children causes.

Exposure to fluoride could come through public water, toothpaste and a few other ways.

The authors reference a study in Mexico showing slightly more than a 6% drop in IQ in both girls and boys.

Fluoride is considered so beneficial to the general population dental health that it is added to the public water systems of many cities. One or even two studies are rarely enough basis on which to change medical, or civic, practice. However, this is a dramatic drop in IQ. The benefits of fluoride can be gained after birth with topical application (tooth brushing with fluoridated paste or application by dentists four times a year).

One issue that was raised as a possible flaw was the amount of sunlight the women were exposed to in the trial. Sunshine is an “essential determinant of vitamin D status, even among those who are taking a high-dose vitamin D supplement,” according to a followup letter to JAMA Pediatrics.

The vitamin may also help children whose mothers experienced preeclampsia. Maternal preeclampsia is considered to be a risk factor for high blood pressure in children and adolescents. A recent study suggested that higher levels of vitamin D in the cord blood at the time of delivery attenuated that risk, even after the researchers controlled for other factors like maternal BMI. However, it is not clear how effectively taking vitamin D supplements increases the concentration of vitamin D in the cord blood. Clinical trials are needed.

Given the shocking research about fluoride and its completely unanticipated effect on the IQs of offspring of pregnant women exposed to it, one has to always worry about the unintended outcome of any non-whole food, supplement or medicine during pregnancy.